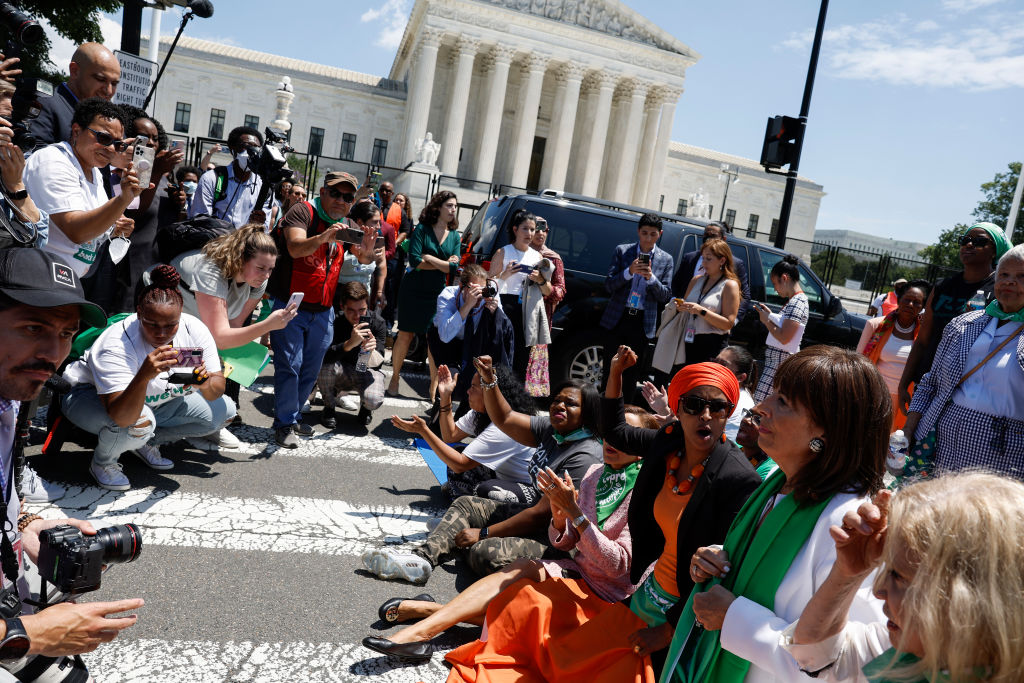 WASHINGTON, DC – JULY 19: House Democrats participate in a sit in with the Center for Popular Democracy Action (CPDA) in front of the U.S. Supreme Court Building on July 19, 2022 in Washington, DC. The CPDA held the demonstration with the lawmakers to protest the Dobbs v. Jackson Women’s Health Organization decision. (Photo by Anna Moneymaker/Getty Images)

A Georgia law banning abortion when a fetal heartbeat is detected, typically around six weeks, will take effect after a federal appeals court on Wednesday rejected a challenge to it by abortion providers.

Chief Judge William Pryor of the Atlanta-based 11th U.S. Circuit Court of Appeals wrote for a unanimous three-judge panel that the state had a “rational basis” for the law, given its interest in “providing full legal recognition to an unborn child.”

Georgia passed the law, which also defines “person” to include an “unborn child,” in 2019. A federal judge blocked it that October before it could take effect, finding it violated the right to abortion established by the U.S. Supreme Court in its 1973 landmark Roe v. Wade ruling.

However, the Supreme Court last month overturned that ruling, clearing the way for Wednesday’s decision.

The law took effect after the 11th Circuit, in an unusual move, issued a separate order about two hours after its decision staying the trial court’s injunction.

“This is a grave human rights violation, and Planned Parenthood, along with its partners, will do everything in our power to fight back and ensure all people can get the health care they need, regardless of where they live,” Alexis McGill Johnson, president of Planned Parenthood, one of the providers in the lawsuit, said in a statement.

The office of Georgia Attorney General Christopher Carr did not immediately respond to a request for comment.

About half of U.S. states have or are expected to seek to ban or curtail abortions following the Supreme Court’s June 24 ruling. Judges have largely upheld the laws against legal challenges, though some, including in Utah and Kentucky, have been blocked for now.

The Georgia law includes exceptions for medical emergencies, and for cases of rape or incest where a police report was filed.