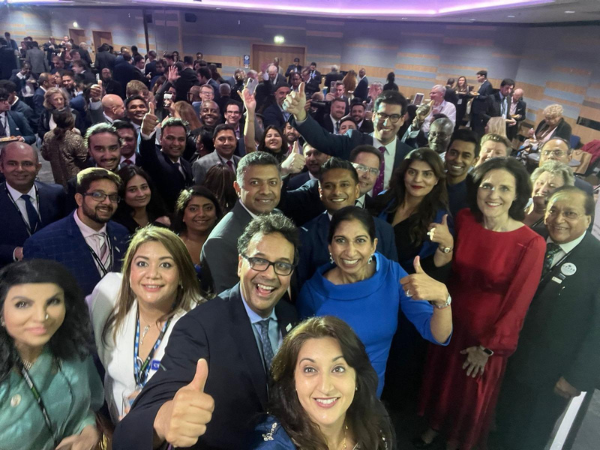 The Conservative Friends (CF) of India and the Indian high commission in London recently hosted a joint reception at the annual Conservative Party Conference in Birmingham which was attended by more than 400 guests, including many high-profile ones.

The event celebrated the importance of strong ties between the UK and India and the contribution of the Indian diaspora in Britain.

High commissioner from Bangladesh, HE Saida Muna Tasneem; and the Maldives, HE Dr Farah Faizal, were also present on the occasion.

Cllr Reena Ranger, CF India co-chair, paid tribute to the late Queen Elizabeth II and delivered the proclamation “God Save the King”. She highlighted India’s secular tradition and how CF India is led by British Indians who are Sikh, Hindu, and Muslim — all working in harmony and promoting the secular and meritocratic values of India and the Conservative Party.

Andy Street, the Conservative mayor of the West Midlands who played the conference’s host, said how proud he was to be the mayor of the region, which the diaspora has enriched and how he was delighted to meet the new Indian high commissioner HE Doraiswami. He said he looked forward to continuing the strong engagement the region has with Indian businesses.

He also thanked CF India and Ranger, Jogia, and Nayaz Qazi, its director.

HE Doraiswami, who welcomed the guests and paid tribute to the late Queen, lauded the UK as India’s oldest partner. He said people are important to the relationship and the finalising of the trade agreement, and defence and strategic partnership, coupled with the mobility of the brightest talents between the two countries will provide opportunities to both.

Welcoming the high commissioner and other members, Braverman said she would “like to put on record and thank Rami Uncle (Lord Ranger), Reena, Ameet, and Nayaz for all the work they do for CF India and the Conservative Party”.

She said CF India plays a crucial role in helping to win elections and bring the Indian community closer to the party.

“The Conservative Party is a party of meritocracy & talent; which has the most diverse cabinet in history, and we look forward to the start of the free trade agreement between UK and India,” she said.

Speaking of how he enjoyed the reception, foreign secretary Cleverly said, “You can tell it is an Indian event; it is noisy, busy and with so much energy in the room”.

“The British-Indian community and the links with India are hugely important to the United Kingdom; India is one of our closest friends in the world. The UK-India relationship has gone from strength to strength. Two countries bound by heritage and family, I could not be more proud to work with Kemi to make the free trade agreement happen quickly,” he said and thanked CF India and its members.

Lord Ranger welcomed the Indian high commissioner, and the guests, and acknowledged the contributions of CF India members.

“We are delighted that our new high commissioner HE Vikram Doraswami is here with us, witnessing the vibration of India outside India. Britain is a vibrant economy because we are both secular democracies, and our respect for the rule of law and women. The free trade agreement between the 5 & 6th largest economies will be the mother of all free trade Agreements,” he said.

Lord Chancellor Lewis spoke of the importance of the British Indian community and how it brings the UK and India closer together and how the free trade agreement will create many new opportunities, including that in legal services.

He spoke about how the UK and India value democracy and the rule of law. He also thanked CF India for its contributions to the party, and during elections to get more Conservatives elected.

Secretary Jayawardena welcomed the high commissioner and said how proud he was to have worked on building the enhanced trade with India and the soon to be announced free trade agreement.

Secretary Donelan emphasised on the closeness between both countries and how the soon-to-be-announced free trade agreement would help to bring greater opportunities in information technology and digital — key technologies for now and the future.

Qazi gave the vote of thanks with Ranger and Ameet and invited special guest speakers and members to the upcoming CF India Diwali reception.