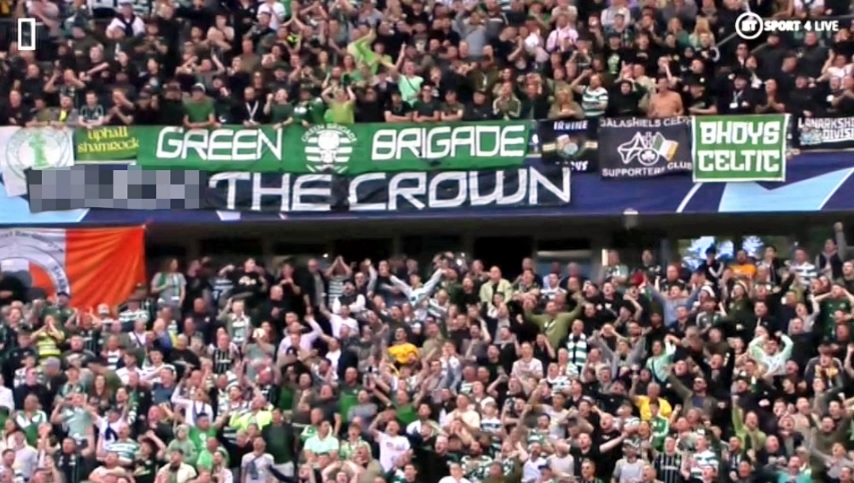 The first banner, reading “F*** the Crown”, was unfurled in the Celtic section of the stadium and BT Sport apologised after it broadcast the visuals.

Scottish commentator Rob MacLean said, “Apologies if anyone has taken offence to anything seen in the early minutes.”

When the Champions League anthem was being played, another banner mocking the Queen came up. It read “Sorry for your loss Michael Fagan,” referring to a man who had sneaked into the monarch’s bedroom after scaling the walls of Buckingham Palace in 1982 in a major security breach.

But players of both the teams wore black armbands during their 1-1 draw to mourn the queen who died last week aged 96.

Rangers – another Scottish club – played ‘God Save the King’ after observing a one-minute silence ahead of their encounter with Napoli.

There was also a display of a mosaic of the Union Jack with a silhouette of the Queen’s head at one end of the Ibrox stadium where there was a banner reading: “1926 Her Majesty Queen Elizabeth 2022”.

“Her Majesty Queen Elizabeth II was honoured at Ibrox this evening with a minute’s silence, a display created by the Union Bears, and a rendition of the National Anthem”, the Glasgow club tweeted.

But the actions in defiance of UEFA decisions could potentially result in the European football governing body sanctioning the club, media reports said.

On the field, Rangers lost to Napoli 0-3 after being reduced to 10 men in the second half of the match. The comprehensive defeat came a week after they lost to Ajax.