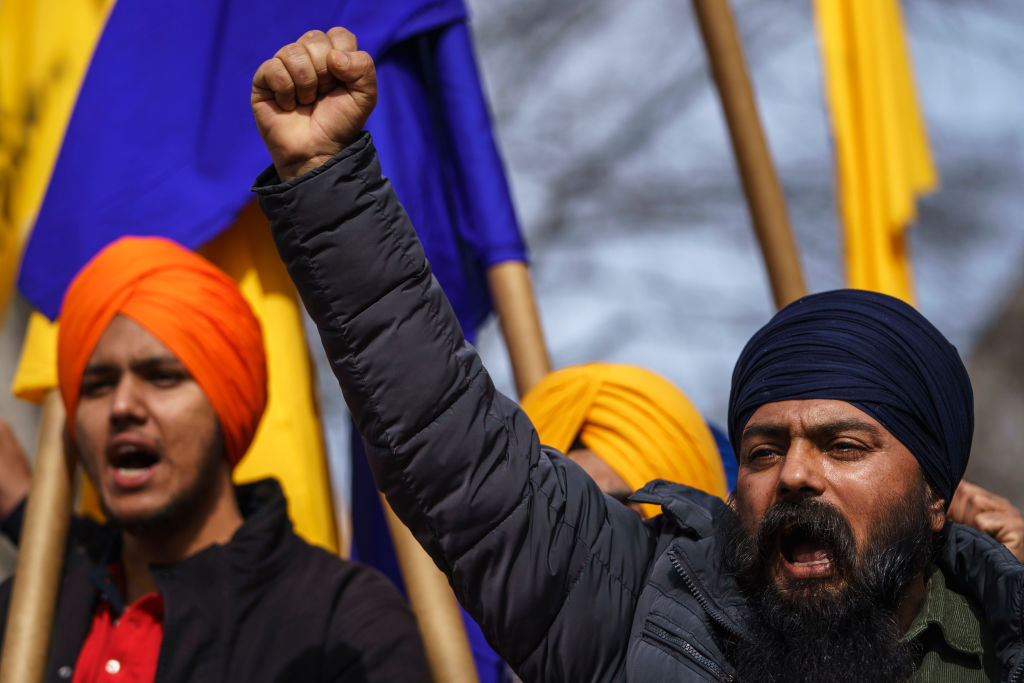 WASHINGTON, DC – FEBRUARY 18: Members of Sikhs For Justice rally against Prime Minister of India Narendra Modi in Lafayette Square across the street from the White House on February 18, 2020 in Washington, DC. The group rallied against what they call Modi’s poor treatment of the Sikh community and for the secession of Punjab from India as Khalistan. U.S. President Donald Trump is scheduled to visit India from February 24 to 25th. (Photo by Drew Angerer/Getty Images)

The Canadian government has conveyed to India that Canada will not recognise the objectionable ‘Khalistan’ referendum organised by the proscribed organisation Sikhs For Justice (SFJ) in Ontario on November 6, the Ministry of External Affairs said Thursday.

“Government of Canada has conveyed that they respect the sovereignty of India and will not recognise the (‘Khalistan’) referendum… deeply objectionable that politically motivated exercises by extremist elements are allowed to take place in a friendly country,” MEA spokesperson Arindam Bagchi said during a weekly presser. “Our position on the anti-India elements to hold the so-called ‘Khalistan’ referendum is well-known. The Canadian High Commissioner here and the Deputy Foreign Minister reiterated this perspective earlier this week in separate statements. You all are aware of the history of violence in this regard,” Bagchi added.

India will continue to press the government of Canada on this matter and call upon them (the Canadian government) to prevent anti-India activities on individuals and groups based in Canada, Bagchi said.

India recently served a demarche to the Canadian government, asking it to stop the so-called ‘Khalistan’ referendum organised by the proscribed organisation in Ontario on November 6.

The Centre has asked the Canadian government to act against those who promote terror and violence against the largest democracy in the world.

Amid the surge in activities of anti-India elements in Canada, High Commissioner Cameron MacKay last Thursday said the Justin Trudeau government supports the sovereignty and territorial integrity of India.

“Canada supports the sovereignty and territorial integrity of India,” MacKay said to a question by ANI, in an apparent clarification of his earlier remarks.
The envoy who was visiting the Gurudwara Bangla Sahib in the national capital was asked about the measures that the Canadian government was taking to deal with the ‘Khalistani’ outfit, which is proscribed in India.

MacKay, earlier, said all faiths are welcome in Canada, in response to how Canada was dealing with increasing anti-India elements in his country. “In Canada, we love people of all faiths,” he said.

When asked about the so-called referendums by ‘anti-India’ outfits, High Commissioner MacKay said, “All faiths are welcome in Canada” and repeated the statement once more for the third time.

Meanwhile, last month India issued an advisory for its nationals and students in Canada to remain vigilant amid increasing incidents of crimes and anti-India activities in the country. In a statement, the external affairs ministry said Indian missions have taken up these incidents with the Canadian authorities and requested them to probe these crimes.

The MEA noted that there has been a sharp increase in incidents of hate crimes, sectarian violence and anti-India activities in Canada. “In view of the increasing incidences of crimes as described above, Indian nationals and students from India in Canada and those proceeding to Canada for travel/education are advised to exercise due caution and remain vigilant,” the statement added.