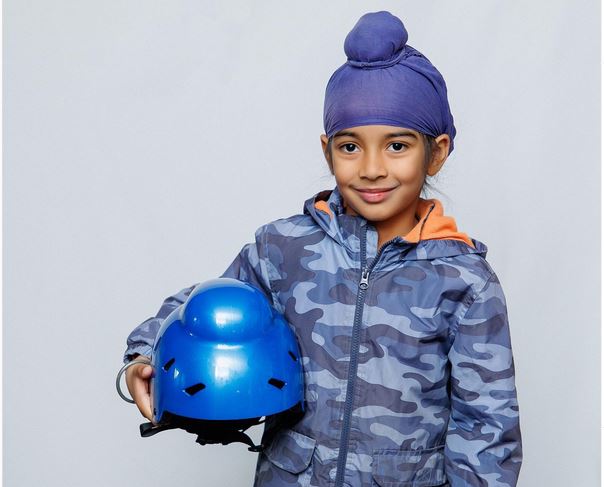 Sikh woman from Ontario has designed turban-friendly helmets for her kids as they started to ride bikes. Tina Singh started making the helmet as she could not find a single helmet in the market to accommodate the turbans of her three sons, CBC News reported.

Tina Singh has designed what she calls the first safety-certified multisport helmet. She worked on and tested different versions of the helmet for more than two years, as per the CBC News report.

According to Singh, the helmet is in production and certified for use with bicycles, inline skates, kick scooters and skateboarding for kids over the age of five. “My kids keep their hair, so anytime I went to go put a bike helmet when they were going out to ride … nothing fit them properly,” CBC Toronto quoted Tina Singh as saying.

Finding no turban-appropriate helmet meant that Tina Singh had to use larger helmets that did not fit right and none were safe options. Tina Singh, an occupational therapist who has worked with patients with acquired brain injuries understood how important it was to have a well-fitting bicycle helmet.

“I was frustrated that there wasn’t a safe option in sports helmets for my kids,” CBC Toronto quoted Tina Singh as saying.

The helmet designed by Tina Singh has a unique model as it has a domed portion on top to accommodate her child’s hair. Furthermore, the helmet has a two-finger space above the eyebrow, designing a “v” shape around the ear and a one-finger space between the chinstrap and the ear, as per the CBC News report. In December, the international testing company SGS gave a passing grade to the helmet.

Speaking to CBC Toronto, Balpreet Singh, legal counsel for the World Sikh Organization of Canada, called the helmet a “welcome step.” Singh said that a helmet is an option that Sikh families can consider and definitely long overdue.

“There are some Sikhs that do wear helmets and also many Sikhs that choose not to wear helmets because they don’t feel anything should cover the turban. So I think this is definitely one more option that Sikh families can consider and definitely long overdue,” CBC Toronto quoted Balpreet Singh as saying.