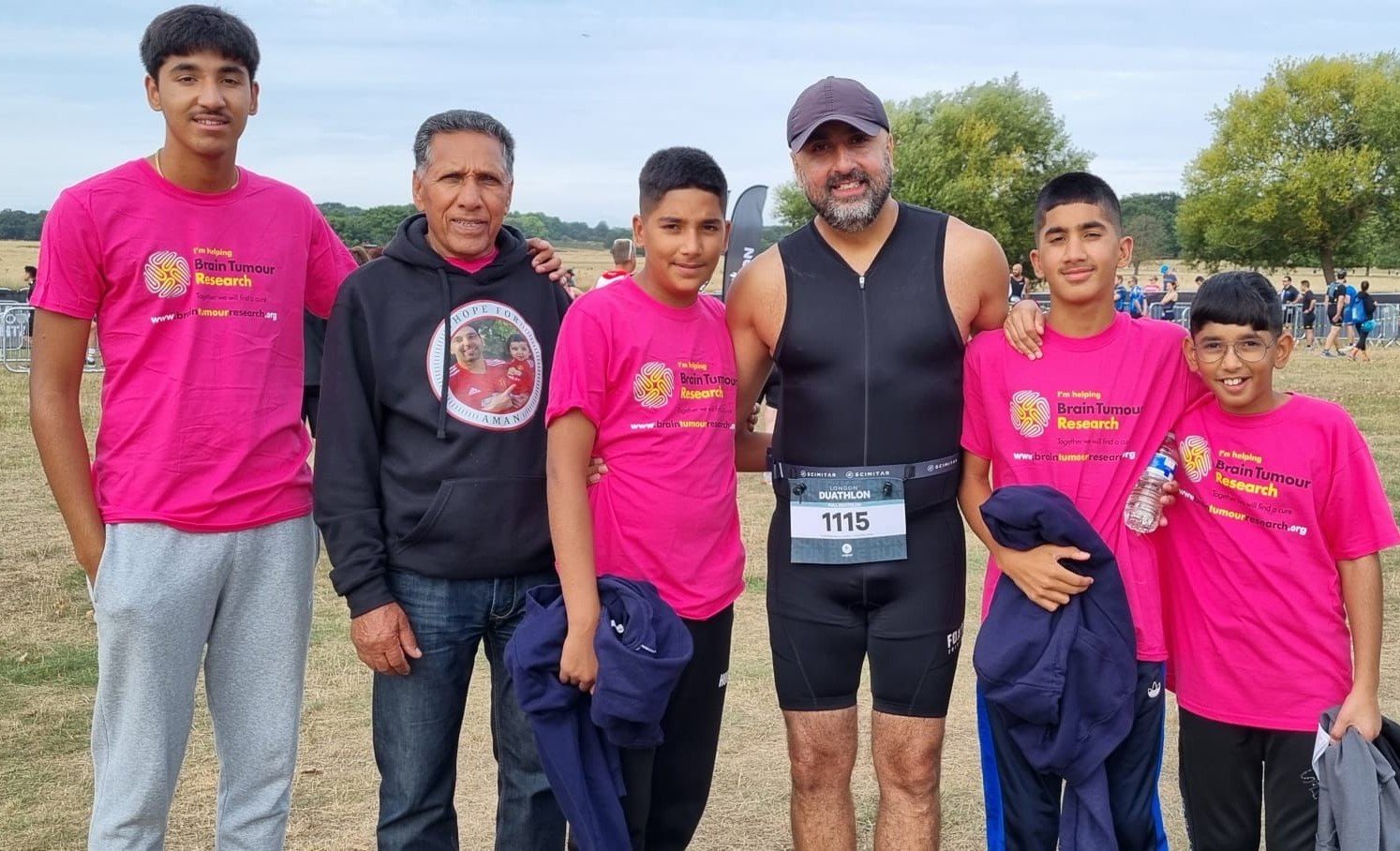 A Buckinghamshire man has completed the first of three gruelling challenges inspired by ‘three gems’ who died within 20 months of each other.

Suki Sandhu, from Milton Keynes, took part in the London Duathlon on Sunday (4 September) in aid of the charity Brain Tumour Research, running 10km, cycling 44km and running a further 10km to finish in three hours and 27 minutes.

The father-of-three said: “The London Duathlon is the biggest duathlon in the world, which I hadn’t realised, and Richmond Park itself is beautiful; we were cycling and running past deer, which was just gorgeous.

“If there was an award for spectators, my team would have nailed it because they all had pink Brain Tumour Research t-shirts on so I could see them from miles away. I had almost 20 family and friends there and it was so energising because as soon as I saw that pink pop up, I knew it was them.

“They spread out, too so I had constant support and, for my last 5km, my sons and nephew ran part of it with me. They were all there at the end and there were a lot of tears but it was really memorable. It’s not an easy task and to see so many great athletes, some of them much older, was really inspiring.”

Suki, who is a product director for online gaming company Inspired Entertainment and a youth football coach, is planning to complete two further endurance events for the charity, all in memory of three loved ones who died recently.

Affectionately referred to as the ‘three gems’, these include his cousin Sarinder ‘Shindi’ Sangha and brother-in-law Aman Sumal, both of whom died of glioblastoma (GBM) brain tumours, and the wife of another of his cousins, Tarsem ‘Rani’ Sangha, who died of ovarian cancer.

Father-of-two Shindi, who was also a PhD graduate, a librarian and a former lecturer at South and City College Birmingham’s Bournville Campus, died aged 59 in March 2020 while young father Aman, an engineer and an identical twin from Ruislip, West London, died aged 36 in November 2021.

Mother-of-two Rani, who practiced family law and was partner at a Coventry-based solicitor’s firm, died aged 54 in August 2021, six years after being told she had just six months to live.

Suki, who turns 50 later this month, said: “We’ve lost three beautiful loved ones but knowing what I now do about Brain Tumour Research and what it’s doing in terms of research and trying to find a cure, makes me want to help. I’ve known people who have been diagnosed with other types of cancers, ones that are much better funded and more widely researched, who are fine now and I want the same to be true of brain tumour patients in the future.

He added: “I don’t like to think of families going through so much pain when their loved ones have been diagnosed with this severe disease and, instead of spending time with them and cherishing those memories, they’re busy trying to find cures. I know that Aman’s and Shindi’s families left no stone unturned in their effort to save or extend their lives and I hope that one day the contribution we make to the charity will go towards helping somebody else’s family.”

Suki’s upcoming challenges include a 160km three-day cycling challenge from the Golden Temple in Punjab, India, which is one of the holiest sites in Sikhism, across the border into Pakistan. There he will visit Nankhana Sahib, the birthplace of the founding guru of Sikhism, Guru Nanak Dev Ji. He is aiming to do it in November in time for Gurpurab, which is Guru Nanak Dev Ji’s birthday.

It will also be a historical trip for British-born Sikh Suki, whose grandfather was part of the Lahore Regiment and the British Army’s pre-partition of India and Pakistan. Arrangements are being made through Zaigham Imtiaz, who runs the Lahore Cycling Club in Pakistan, and anyone wishing to join Suki can message him on Facebook. He is also planning to run the London Marathon in April next year.

He said: “My family members, and especially my mother-in-law, have been so entrenched in grieving for their loved ones that they’ve not really thought about how they can help other people, but seva, the act of selfless service, is such an important part of Sikhism that I hope this will remind us to try and help others and soften the grieving process for us all.”

Charlie Allsebrook, community development manager for Brain Tumour Research, said: “Suki and his family have been through unimaginable heartbreak. We’re so sorry for their loss but know that, sadly, their story is not unique. Brain tumours kill more children and adults under the age of 40 than any other cancer yet, historically, just 1% of the national spend on cancer research has been allocated to this devastating disease. We’re working to change this but it’s only by working together that we will be able to improve treatment options for patients and, ultimately, find a cure. We appreciate Suki’s support and wish him the best of luck with his remaining challenges.”

Brain Tumour Research funds sustainable research at dedicated centres in the UK. It also campaigns for the Government and the larger cancer charities to invest more in research into brain tumours in order to speed up new treatments for patients and, ultimately, to find a cure. The charity is the driving force behind the call for a national annual spend of £35 million in order to improve survival rates and patient outcomes in line with other cancers such as breast cancer and leukaemia and is also campaigning for greater repurposing of drugs.