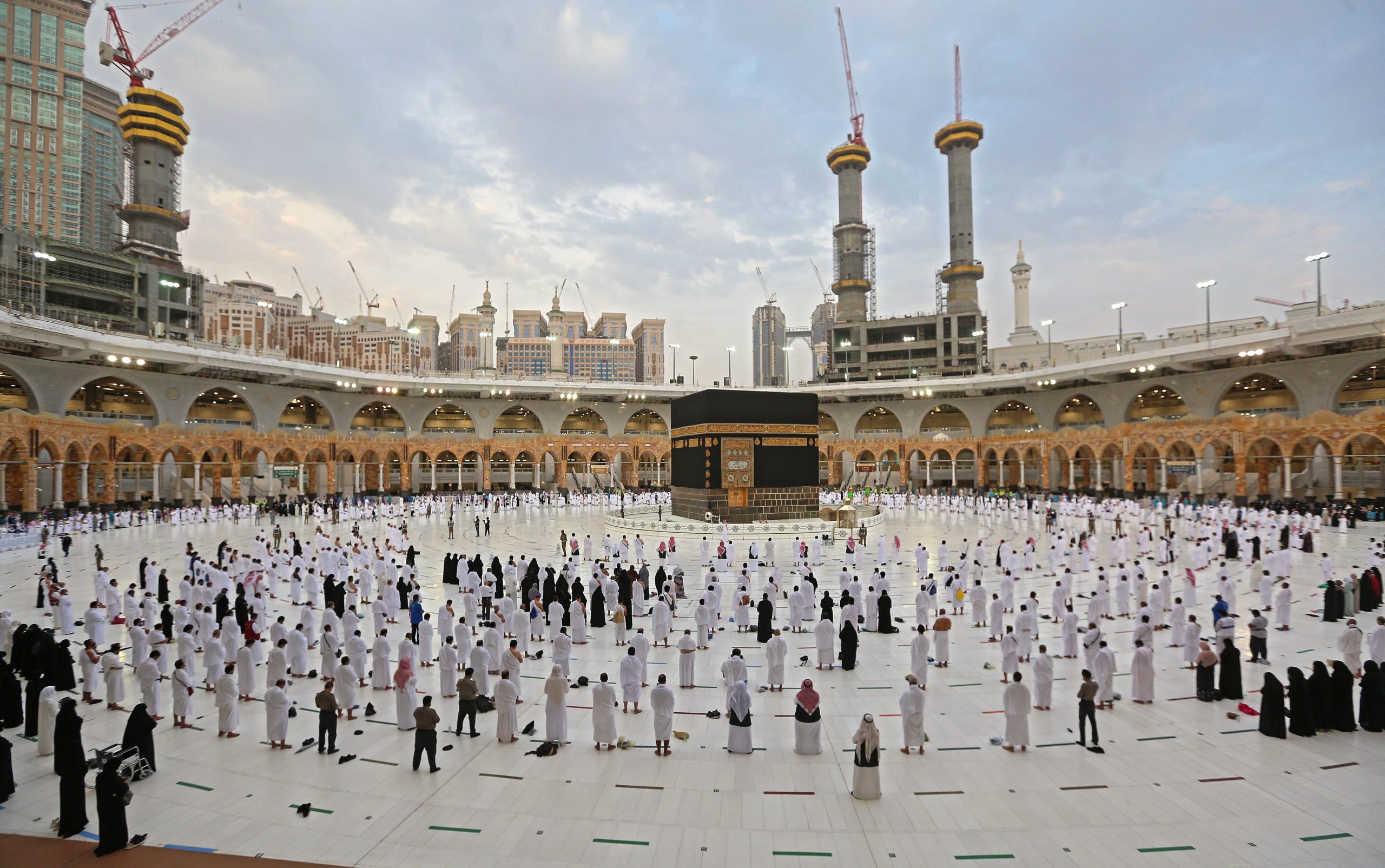 A PROMINENT Muslim scholar has voiced concerns about Britons travelling to perform hajj without the supervision of British travel agents.

In early June, Saudi Arabia made the decision to make would-be hajj pilgrims from Europe, Australia and the US, apply for visas via a government portal online, a move intended to crack down on ‘fake’ travel agencies, but which has ultimately also led to legitimate travel agents facing financial ruin.

Shaykh Yunus Dudhwala is the head of chaplaincy at Barts Health NHS Trust. He has led groups to perform hajj for over a decade through the British Hajj & Umrah services travel agency based in Preston.

He said travel agents issued not only ticket and hotel bookings, but they also provided guidance to pilgrims throughout the entire hajj journey.

“I think everyone who was going this year is very apprehensive because they don’t have the support systems that have been in place previously,” Shaykh Dudhwala told Eastern Eye.

“There are seminars we host before we even leave the UK; we tell people which hotels they will stay in, the places will visit, the rituals they will perform and how they’re supposed to be done.

“They are given all the necessary logistical items, such as lanyards and ID cards.

“Then, at the airport, they’ll be met by someone from the travel agency who will make sure everything is on order. There will be somebody with them on the plane all the way to Saudi. When they land, they will be met by another person from the group who will take them via coach to their hotel.

“The agency makes sure the food is right. So, for example, if there’s Asian community, then they would prefer to have Asian food.

“Then when travelling from one place to the other, from organising coaches to handling luggage, all that is done by the travel agents who go from here [the UK].

“There’s so much logistical support that was being offered.”

British Muslims this time round booked hajj packages through licensed tour operators, putting thousands of pounds down as deposit.

However, these were automatically cancelled and they were instead registered and included in a lottery for hajj visas organised by the Saudi authorities.

After saving years for the pilgrimage, which can cost between £6,000 and £13,000 per head, many were left disappointed after they were unsuccessful through the lottery system.

Those who failed to get a visa via the Saudi online portal Motawif claimed the process was “an absolute nightmare”.

Zaynab* (not her real name), a teacher from London, said she saved for seven years to perform hajj with her husband and mother-in-law.

She booked a package through a hajj-specialist travel agency in Tower Hamlets, London. They had tailored the trip according to her needs.

“My mother-in-law has really bad arthritis and finds it difficult to walk long distances. The travel agents made sure our hotels in Makkah and Madinah were five minutes walking distance from the mosques. We had rooms that were easily accessible. There would be a wheelchair provided for her when she needed it. They took details of all our medical needs in case of an emergency,” said Zaynab. “

They made sure the hotel provided the type of food we eat, because, in Saudi Arabia, different hotels cater for pilgrims from different parts of the world. Some might be for people from Indonesia, others from the sub-continent, others from Europe.”

When she was told her booking was no longer valid due to the rule change, Zaynab said she was “distraught”.

Luckily for her, her family managed to get visas through Motawif. But that brought even more problems.

“We had to choose a package organised by the Saudi authorities. The decent ones were up to £2,000-£3,000 more than what we were going to pay,” she said.

“The booking website was terrible. We had to jump through so many hurdles to book our tickets and accommodation. We are supposed to fly out on Friday (1) and we haven’t even received our visas yet or details of our flights, itinerary, which group we are going with. And we can’t even get through to Motawif for answers. We are just praying we can leave on Friday.”

Zaynab is not alone; social media has been flooded with complaints regarding Motawif, with the hashtag #paidbutfailed trending on Twitter in reference to the difficulties people are facing.

Last Saturday (25), a dozen people were told they could not fly from Manchester as e-tickets covering flights and the hajj were not issued in time by Motawif. They had to return home and wait to see if their flights could be rearranged.

“Motawif’s failed miserably as it’s come far too late – it’s not been piloted or trialled, and it hasn’t proved as flexible or competitively priced as first claimed,” said Prof Sean McLoughlin, from the University of Leeds, who has been researching the hajj industry for over a decade.

“The other problem is that Motawif is not communicating clearly and is contradicting itself – they don’t seem to have the capacity to deliver and their technical system has let them down badly.”

“While the previous system was sometimes exploited by frauds, the best agents sought to make the complexities of hajj easier for their pilgrims.”

Shaykh Dudhwala foresees this to be just the start of the problems for travellers this year.

Hajj is a complex pilgrimage with many rituals. There are different sects among Muslims and each performs these rituals in separate ways.

Usually, each travel agency will have an imam accompanying a group of between 50-100 people who follow the same sect.

However, this year, the Saudi authorities have taken the responsibility of overseeing the spiritual aspect of the estimated one million pilgrims, despite providing little clarity yet on how they will do this.

“There’s a lot of mental preparation too – and the imam can provide spiritual and mental guidance, preparing the group for the difficult journey. During the hajj, there are so many questions people have. We provide those answers, but now they’ve got no point of contact.”

Shaykh Dudhwala added that some of the rituals, if not performed according to the school of thought, can lead to pilgrims having to pay penalties, such as sacrificing an animal, which can cost £200-£300.

“If a person follows a certain school of thought, then they would want to carry on doing what they have done their whole lives, such as during salah (prayer), during fasting and that’s what they want to do during the hajj as well.

“But if they have no access to their own personal scholars from their particular school of thought, then they have no choice but to follow whatever they’re being taught.

“I do worry about what might happen in Saudi while they’re there. I am very, very concerned.

“We have a system here where they can contact us through a messaging service for advice. A few imams have set up a helpline, so people can ask questions through that portal – hajjhelp.com.”

A hybrid system where the Saudi authorities shared responsibilities with British travel agents would have been a better solution, Shaykh Dudhwala said.

“This year, they left it too late; it was done three or four weeks prior to the launch and I don’t think the portal was ready; neither were the organisers. The timing was not right.

“If they wanted to introduce this new system, they should have started with a hybrid system where they had some support mechanism from this country – support workers from the UK who have had past experience of the logistical elements. Or spiritual support from this country. At least you have something reliable in place this year, which is a hybrid system, which would have then helped towards moving on towards the system that they wanted for next year.”

He added: “The goal is the same, the objective is the same; we want everyone to have a fantastic experience when they go for hajj.

“I hope while pilgrims are there the authorities fulfil their expectations to a level where they feel that they’ve been on a journey of a lifetime.”

For British travel agents, some are hoping there might still be room for a hybrid system which seems them involved with the hajj process.

“It all depends on how they [Saudi authorities] perform this year,” a travel agent from East London, who wished to remain anonymous, told Eastern Eye.

“But I feel like they obviously they haven’t made this type of decision, thinking that it’s going to be temporary. Their intention is to make it permanent.’ The Saudi Arabian Embassy in the UK did not respond to a request for a comment from Eastern Eye.