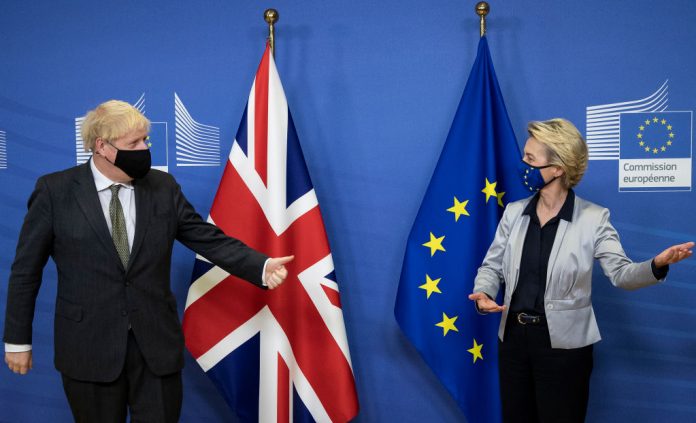 Johnson came to Brussels on Wednesday(9) in a last gasp effort to salvage trade talks that are teetering towards failure and the two leaders agreed that their negotiators should attempt one last push to bridge the divide.

“We had a lively and interesting discussion on the state of play across the list of outstanding issues,” Von der Leyen said in a statement after the dinner at her Brussels’ headquarters.

“We gained a clear understanding of each other’s positions. They remain far apart,” she added.

A senior UK source said the talks were “frank” and that it remained unclear whether the “very large gaps” between the two sides can be bridged.

The leaders agreed to further discussions by their negotiating teams “over the next few days” and that a “firm decision” should be taken by Sunday, the UK source said.

EU negotiator Michel Barnier and his UK counterpart David Frost have narrowed the gaps over eight months but London insists it will reclaim full sovereignty at the end of the year after half-a-century of close economic integration.

European sources said the two men and their teams would return to the talks on Thursday(10) morning, just ahead of a summit of the EU’s national leaders that will once again be clouded by doubts over cross-Channel ties.

The prime minister had jetted over to the city where he made his name as an EU-bashing newspaper reporter and met Von der Leyen in the Berlaymont, headquarters of the EU Commission.

After posing for press pictures, they headed in for a meeting that was treated as the almost-final chance of a breakthrough before Britain leaves the EU single market at the end of the year.

Though prospects for a breakthrough were slight, Johnson “does not want to leave any route to a possible deal untested,” the source said, after the two ate a dinner of scallops and steamed turbot, two of the seafood varieties that European boats fish for in British waters.

Talks are mainly blocked over the issue of fair competition, with Britain refusing to accept a mechanism that would allow the EU to respond swiftly if UK and EU business rules diverge over time and put European firms at a disadvantage.

Fishing is another sore issue, with Europe eager to keep as much access as possible to the UK’s bountiful waters.

“A good deal is still there to be done,” Johnson had told the UK parliament before setting off for Brussels, while insisting Britain would “prosper mightily” with or without agreement.

In Berlin, Germany’s chancellor Angela Merkel said there was still a chance for a deal. Merkel and the other EU leaders, including a sceptical French president Emmanuel Macron, are to meet in Brussels on Thursday for their planned EU summit, but Johnson was not invited.

Von der Leyen will update the member state leaders on her talks with the British premier and offer a clear indication of where she believes the talks are headed, diplomats said.