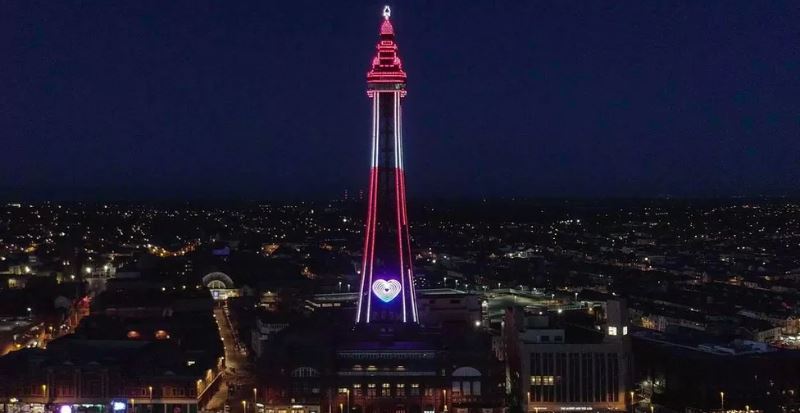 One of the most famous landmarks in Lancashire was lit up in red and white to mark the centennial birth anniversary of His Holiness Pramukh Swami Maharaj.

Prayers were offered at the base of Blackpool Tower before it was lit up on Monday (8). A procession was also held along Blackpool’s promenade as part of the celebrations, media reports said.

The event was organised by the BAPS Hindu Mandir in Preston and the Fylde Coast Hindu Society. Mayor of Blackpool Kathryn Benson and Mayor of Preston Neil Darby have attended the event along with other guests.

Millions have been paying tributes to the spiritual leader from across the world throughout this year.

Pramukh Swami Maharaj led the Bochasanwasi Shri Akshar Purushottam Swaminarayan Sanstha (BAPS) from 1971 until his death in 2016, aged 95. He was the fifth spiritual successor of Bhagwan Swaminarayan.

Pramukh Swami Maharaj visited Blackpool in 1974 and then again in 1977, when he was joined by the current spiritual head of BAPS, His Holiness Mahant Swami Maharaj.

A spokesman told the BBC that it was for the first time the landmark tower had been used in such a way in its 126-year history.

The colours of the lights used in the celebration signify purity, peace and knowledge in the Hindu religion.

Recently, the ‘Festival of Inspiration’ – a ten-day multi-feature cultural event was held at Neasden Temple, which was attended by more than 75,000 people.

With over 1000 sadhus and 55,000 volunteers, BAPS Swaminarayan Sanstha helps 3,850 communities around the world through its various humanitarian services and grassroots initiatives, a statement said.