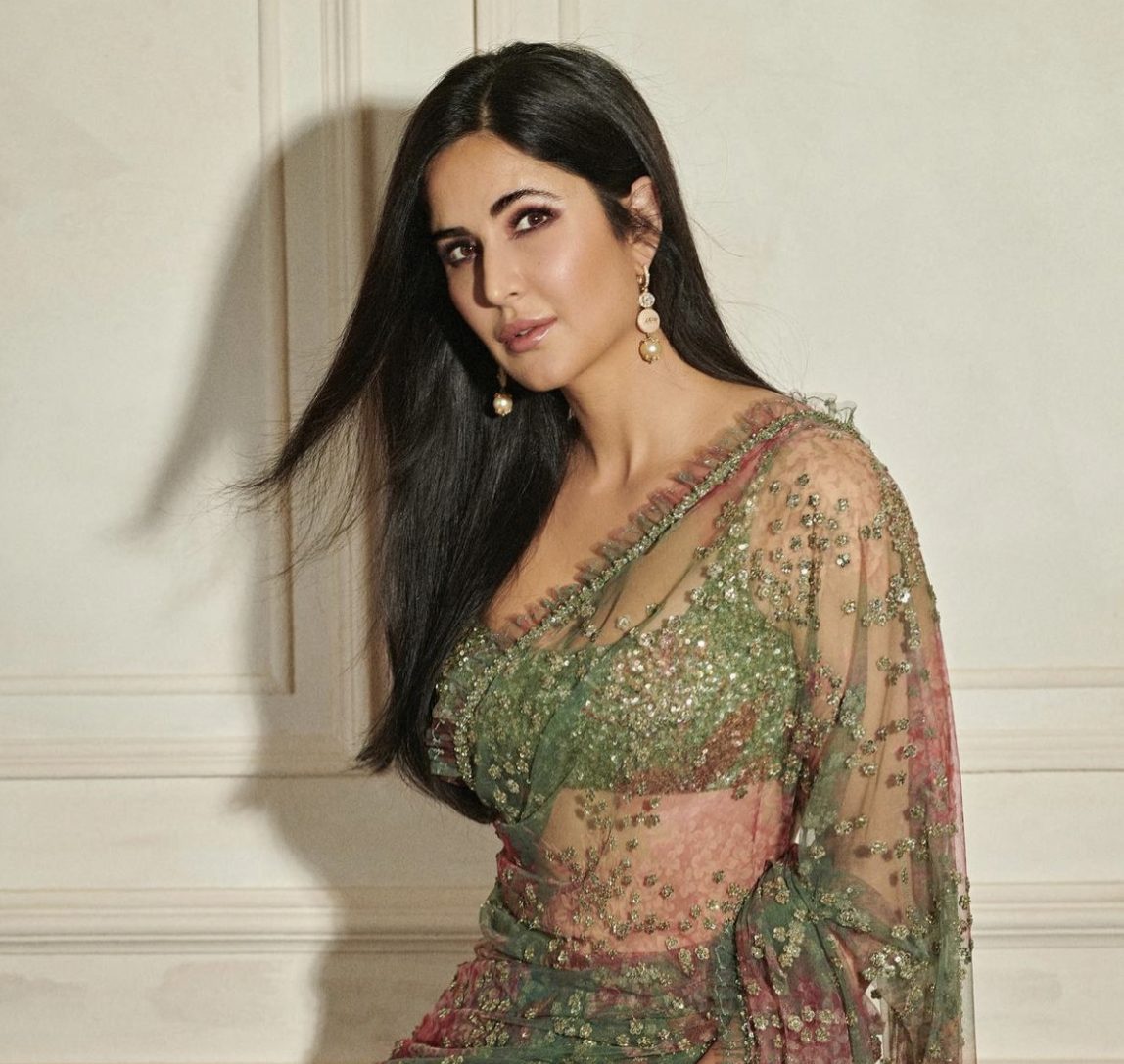 One of the biggest Bollywood success stories of the past two decades has been the incredible impact of Katrina Kaif.

Hit movies, huge stardom and a strong global fanbase haven’t pushed the hard-working actress into any kind of comfort zone.

She is still taking on challenges and has a wide variety of films on the way, including playing a ghost in this week’s big Bollywood release Phone Bhoot.

She stars alongside Siddhant Chaturvedi and Ishaan Khattar in the spooky comedy about spirit hunters.

Eastern Eye met with the actress at Mumbai’s JW Marriot Hotel to speak about Phone Bhoot, her ghostly role, love for the horror genre, two-decade long journey and forthcoming films.

Tell us something about Phone Bhoot, which is your next release after hit 2021 film Sooryavanshi?
The genre and world of this film, I would say, are different from what I have done before. This is a mad, quirky comedy. It is a spoof world where everything is not taken seriously. It makes jokes about all the clichés that you see in horror films. It is more of a tongue-in-cheek comedy with loads of witty one-liners.

The trailer shows you play a ghost in the film. What was the process of portraying this part like?
A lot of fun. I think the writers (Ravi Shankaran and Jasvinder Singh Bath) gave a very clear barometer that they wanted every character to be portrayed in a certain way, and that was wonderful. It was almost like working with (writer-director) Rajkumar Santoshi. He always shows you the shot and then you kind of just copy his performance. That’s the level of clarity you get when you are doing a film with Santoshi.

But this is a horror comedy, so it must have been very different…
This space was, of course, different but the writers were very clear about the pitch. They wanted their lines to be said in a certain way. They are very close to their characters. They know each word and line by heart. So, we were all very clear about this world when we started filming. We had readings in Goa, and it was wonderful. We just sat down at a
table and went through the whole script. There is nothing better than reading the script out loud in a group. The minute someone does that, you instantly know where you pull it up and down. Where you need to come up, where you need to come down. So that was fantastic for
setting the tone for our characters.

Do you watch horror movies?
No, I don’t. I feel my mind is like a sponge. It is very susceptible. Like you won’t believe it, but if there is any violent scene in a film, I always shut my eyes. It does not sit with me, and I’m not able to watch it. The other day, I started watching a show. It was an interesting, historical drama. I loved it so much, but there were so many violent war sequences every five minutes that I had to leave it, because otherwise at night I get such horrific dreams.

Has your husband Vicky Kaushal watched Phone Bhoot, and how did he react to the trailer of it?
He has not seen the film yet, but I am hoping to show it to him soon. He is on an outdoor right now for Meghna Gulzar’s film (Sam Bahadur). He is coming back soon. He loved the trailer; him and Sunny (brother-in-law) both. They laughed at all the jokes. I felt very good, and was like, “Okay, yay, they liked it.”

In the trailer, there is a scene where you say, Aapko Hindi sahi se nahi aati. What was the vibe while performing it because there was a time when you were criticised for your accent in Hindi?
No, I think my Hindi is never going to be as fluent as yours. That’s the way it is. But I think that has been accepted and it’s just fun. So, it’s about having fun; not taking yourself very seriously.

In a time when a new face is launched every Friday, you are about to complete two decades in the business. When you look back at your journey, do you pat yourself on the back?
(Laughs) No, but I probably should, right? I think it is always important to appreciate and be grateful for what I have achieved. I said this a while ago. It is not so much of that now, but there was a time when I reached a particular place and every cell in my body knew that I had achieved everything I had dreamed of.

How do you feel when you look back?
When I started as an actress, I had been fortunate, whether it was working with Yash Chopra (Jab Tak Hai Jaan) or whatever. I believe I am extremely grateful. I think that my journey has been really wonderful. It has been very eventful, but I also look back and feel a lot of love and support from the audience and everyone in the industry, whether it’s the journalists or the media. Of course, every relationship has ups and downs, good times and bad, but overall, I always feel a tremendous amount of love and support.

You have also teamed up with Sriram Raghavan for Merry Christmas. Is the shooting over for that film?
We are still shooting for Merry Christmas. In fact, after the Phone Bhoot promotions, I will resume shooting for that film. That’s an amazing film. That’s Sriram Raghavan’s, you know, one of my favourite directors. I think he is one of our most revered directors, especially in the genre of suspense thrillers. Vijay Sethupathi is in that film. Again, a phenomenal talent to be working with.

You also have hotly anticipated film Tiger 3…
Tiger 3 is getting ready. They have announced Diwali 2023 as the release date, which is exciting. That’s a great time to come. It is a film which I am extremely excited about. It has a phenomenal role for me. And that’s one thing with the Tiger series. I always know that (my
character) Zoya has been given that importance and all those challenging situations. The sequences in Tiger 3 are going to be a delight to watch. I think they are going to be special and believe they will live up to people’s expectations of the Tiger franchise.

And what about Jee Le Zaraa, your film with Priyanka Chopra and Alia Bhatt?
Jee Le Zaraa is obviously there. In a woman’s life, there are many changes and different phases. Similarly, at different times, the film has been moved for various reasons. But I do believe that we all share one thing, which is the knowledge that we will make this film. It is just the matter of getting everyone’s time together. So, as of right now, I believe the film is scheduled for the end of next year.

You just spoke about Tiger 3. The first instalment of the franchise, Ek Tha Tiger, has just clocked up a decade. Any trivia from the film that fans haven’t heard before?
One piece of trivia people may or may not know is that it was me who introduced (director) Kabir Khan to Salman Khan. He had wanted to narrate the film to Salman. It was one of the awards shows, and I was like, “Kabir, this is Salman; Salman, this is Kabir. He has an idea to narrate to you. Then someone called Salman on stage to collect an award, but he chose to sit and chat with Kabir Khan. So that was their first interaction. I think Salman took a decision in two hours or something. But I remember very specifically them having a conversation for Ek Tha Tiger backstage at one of the award shows.

What kinds of films and genres are on your bucket list at this point in your acting career?
Character is tough, but there are so many phenomenal people around I have yet to work with. I want to do something in the action space, but with an emotional angle. I feel that is sometimes the key that we lack in female-driven action pieces; you need to have the emotional angle behind it; otherwise, people don’t connect, and you are in an alien world doing an alien thing. So, you need something to connect to. I also still haven’t done a period piece, right? I have been saying that for the last 10 years. I would love to be in a period drama. So yeah, it’s good news that even after 19–20 years, there is still so much left for me to explore and accomplish, to reinvent, and to keep evolving.

Phone Bhoot is in cinemas now