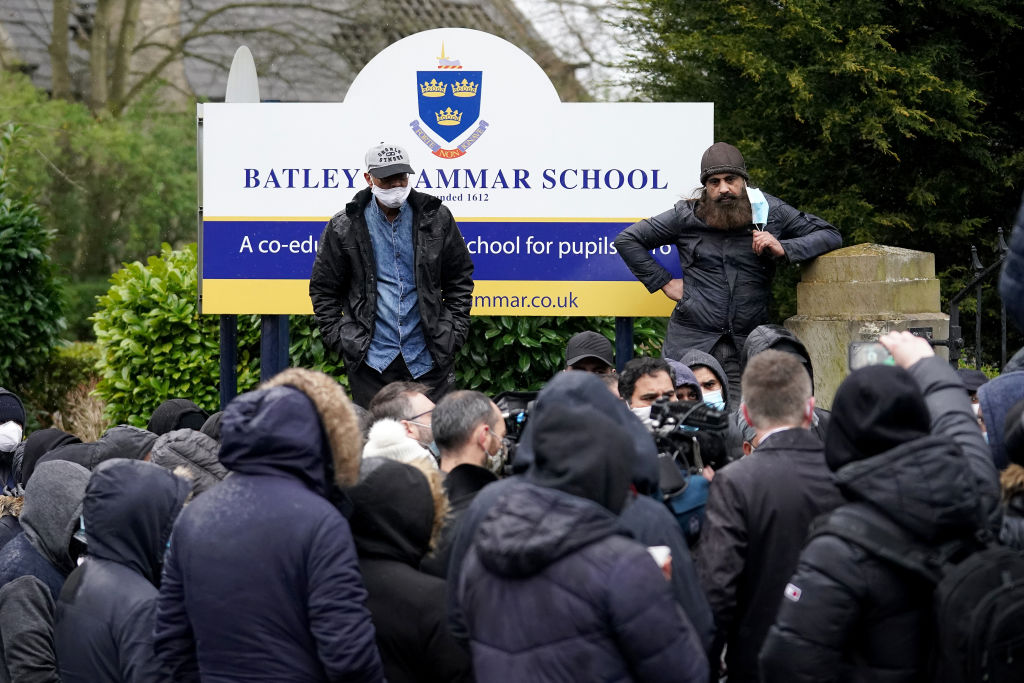 People gather outside the gates of Batley Grammar School, after a teacher was suspended for showing an image of the Prophet in class on March 26, 2021 in Batley, England. (Photo by Christopher Furlong/Getty Images)

A BATLEY teacher, who was suspended after showing children an image of the Prophet in school, has been reinstated following an independent inquiry.

Batley Multi Academy Trust, which runs the school in west Yorkshire, said the teaching staff who developed and delivered the lesson genuinely believed that using the image had an educational benefit and that it was not used with the intention of causing offence.

Adding that the image was included to “initiate a discussion about the meaning of blasphemy”, the reports said the trust recognised that using the image caused “deep offence” to a number of students, parents and members of the school community and that it “deeply regrets the distress” caused.

“Topics covered by the lesson could have been effectively addressed in other ways and without using the image,” the report said, adding the image was shown on more than one occasion.

In future, the teaching materials will be subject to more rigorous monitoring and staff will also be given more training on understanding the sensitivities of their students, the report said.

The National Education Union welcomed the lifting of the suspension, saying it was “pleased the correct decision has been reached.”

A Department for Education spokesperson also said parents, families and the local community should “welcome and support the trust’s comprehensive plan to strengthen its oversight of the curriculum.”

However, Batley Parents and Community Partnership (BPCP), said while they “acknowledge and welcome the lessons learnt,” they are “disappointed at the lack of clarity, transparency and rationale behind some of the findings.” It also pointed out that “given the background of this caricature”, the report still fails to address how “it is possible that teachers were unaware of the offence it would cause.”

Protests broke out when a teacher at Batley Grammar School showed an image during a religious studies lesson in March, after which angry protesters gathered outside the school for several days forcing it to close temporarily.

Despite the latest developments, the teacher is unlikely to return to his job, one media outlet claimed.