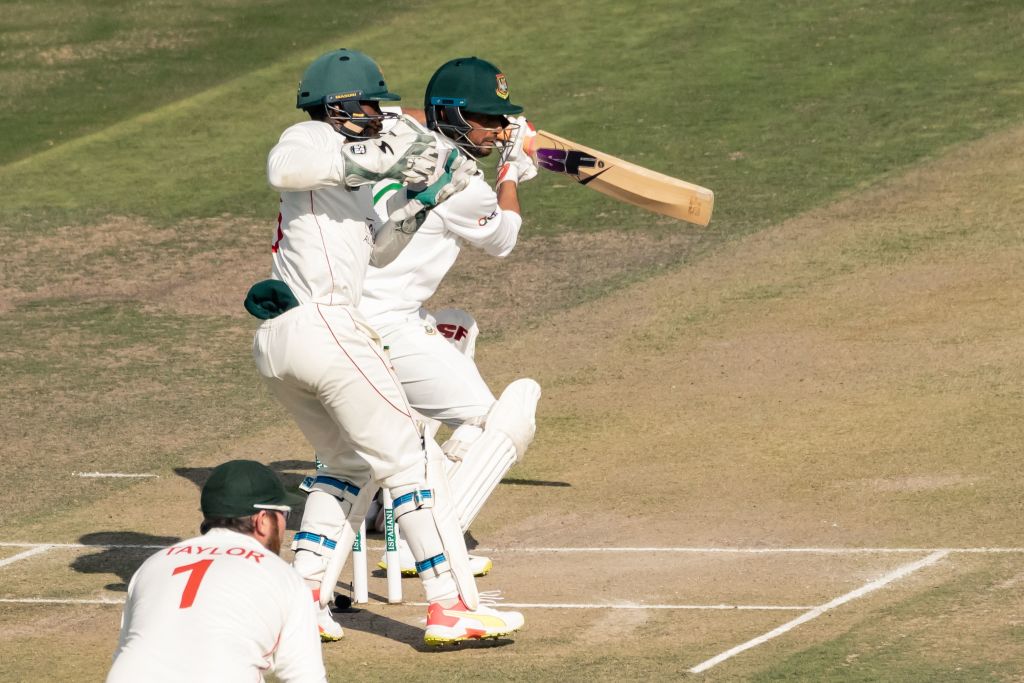 Bangladesh’s Mahmudullah (R) plays a shot as Zimbabwe’s wicketkeeper Regis Chakabva looks on during a Test match between Zimbabwe and Bangladesh at the Harare Sports Club in Harare on July 7, 2021. (Photo by JEKESAI NJIKIZANA/AFP via Getty Images)

BANGLADESH overcame stiff resistance from Zimbabwe batsmen to win a one-off Test by 220 runs at Harare Sports Club on Sunday (11).

Needing 477 to win, the hosts were all out for 256 after brave innings from nightwatchman Donald Tiripano and fast-medium bowler Blessing Muzarabani delayed the tourists’ celebrations.

It was the fifth Test victory for Bangladesh outside the country and a fitting send-off for all-rounder Mahmudullah Riyad, who is retiring from the longest format after an unbeaten career-best 150, his fifth Test century, in the first innings.

The visitors formed a guard of honour for Mahmudullah, playing his 50th Test since making his debut in 2009, and let him lead the team on to the pitch for the final day, which began with Zimbabwe 140-3.

New cap Dion Myers added a further 19 in tandem with Tiripano before Bangladesh made a telling breakthrough.

Myers eked out 26 from 88 balls, a nuggety innings punctuated by two sixes and helped by two dropped chances by wicketkeeper Liton Das and Shakib al Hasan.

He was undone by off-spinner Mehidy Hasan Miraz, chipping him straight to Shadman Islam at midwicket.

The departure of Myers triggered a collapse as Zimbabwe slumped to 176-7 at lunch.

Timycen Maruma and Roy Kaia were both trapped leg before for ducks and wicketkeeper Regis Chakabva made just one before being bowled by Taskin Ahmed who finished with 4-82.

But Bangladesh’s hopes of wrapping up a victory swiftly were dashed as Tiripano and Muzarabani dug in to add 41 for the ninth wicket.

Tiripano made 52 off 144 balls before edging a good-length delivery from Ebadot Hossain and a diving Das made the catch.

Muzarabani finished unbeaten on 30, having faced 51 balls in 93 minutes and struck four fours.

But Bangladesh completed the victory when Richard Ngarava went for a big slog against Mehidy and lost his middle stump.

Mehidy finished with 4-66 to give him nine wickets in the match.

The all-format tour by Bangladesh resumes on Friday (16) with the first of three one-day internationals, which will be followed by three Twenty20 internationals.