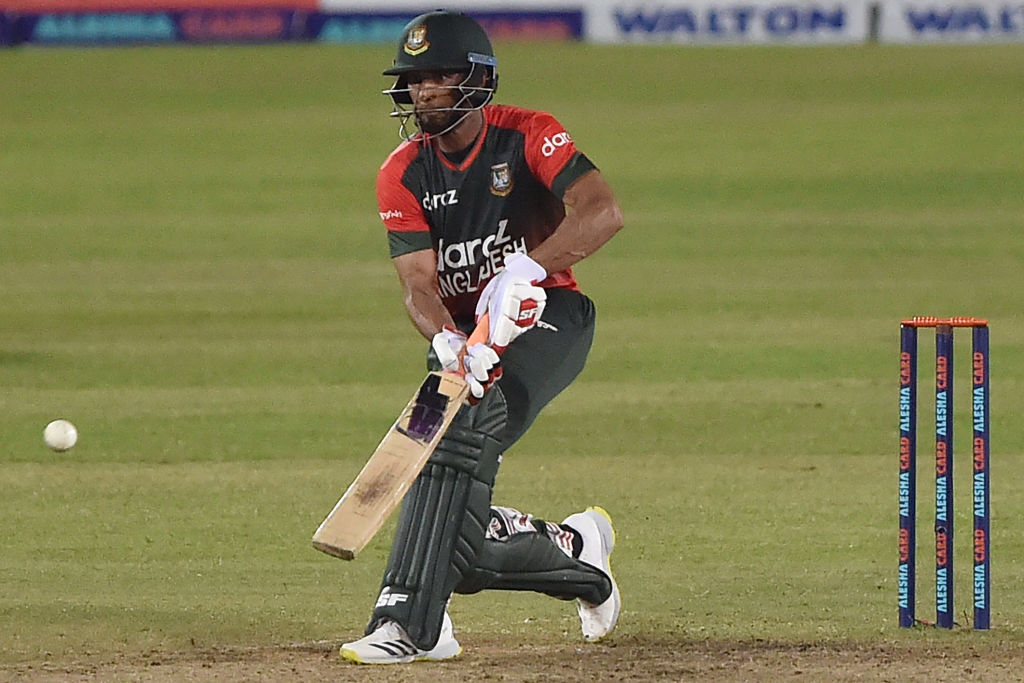 Bangladesh’s Mahmudullah plays a shot during the third Twenty20 international cricket match between Bangladesh and Australia at the Sher-e-Bangla National Cricket Stadium in Dhaka on August 6, 2021. (Photo by MUNIR UZ ZAMAN/AFP via Getty Images)

BANGLADESH captain Mahmudullah guided his side to their first ever series win over Australia on Friday (6), masterminding a thrilling 10-run victory in the third Twenty20 international.

Having taken an unassailable 3-0 lead in the five-match series in Dhaka, the young Bangladesh team fell into each other’s arms in disbelief at their biggest night in cricket.

Before this week, Bangladesh had never even beaten Australia in a T20 match. It was their first series win over their lauded opponents in any format.

“I am so proud. The boys stood up at an important time,” said the captain, whose 52 laid the foundation of Bangladesh’s 127 for nine off their 20 overs.

While Mitchell Marsh, who made 51, and Ben McDermott (35) had threatened to see Australia to victory in the empty stadium, Bangladesh’s bowlers again put a stranglehold on the run-scoring in the final overs.

Australia made just 117 for four, losing by 10 runs, to the frustration of their captain Matthew Wade.

Even a hat-trick by young bowler Nathan Ellis on his debut could not lift the side and their gloom.

“Very disappointing,” was Wade’s verdict of the match and a series that followed their defeat in the T20 series in the West Indies last month.

While they have been without Steve Smith, David Warner and Pat Cummins, there are still concerns in the Australian camp.

“We would like to correct a few things,” Wade admitted.

Mahmudullah won the toss and surprisingly chose to bat after the start was delayed for more than 90 minutes by rain.

He was his side’s top scorer with his patient 53-ball innings but was also the first scalp for Ellis who came in to give fast bowler Mitchell Starc a rest and made his mark in the final three balls.

As Bangladesh went for big hits, Mustafizur was then caught by Marsh and Mahedi Hasan was caught by Ashton Agar at deep square.

In response, Marsh and McDermott put on 63 for the third wicket but then the slow Dhaka wicket again took a toll. Runs became nearly impossible to find as they were in the first two games that Bangladesh won by 35 runs and five wickets.

The Bangladesh players danced across the field in celebration of the new boost to their international standing in a Twenty20 World Cup year.

They have now won seven straight T20 internationals and Friday (6) night’s victory was even more impressive as it was the lowest total they have ever defended to win.

Mahmudullah said the side had sat down for serious talks after their recent series win in Zimbabwe.

“We felt that we were a good team even though the rankings don’t show that,” he said. Bangladesh are currently rated 10th by the International Cricket Council.

“We just have to play with a big heart and a balanced mind and show our skills,” he said of the country’s prospects at the World Cup, to be held in the United Arab Emirates in October-November.