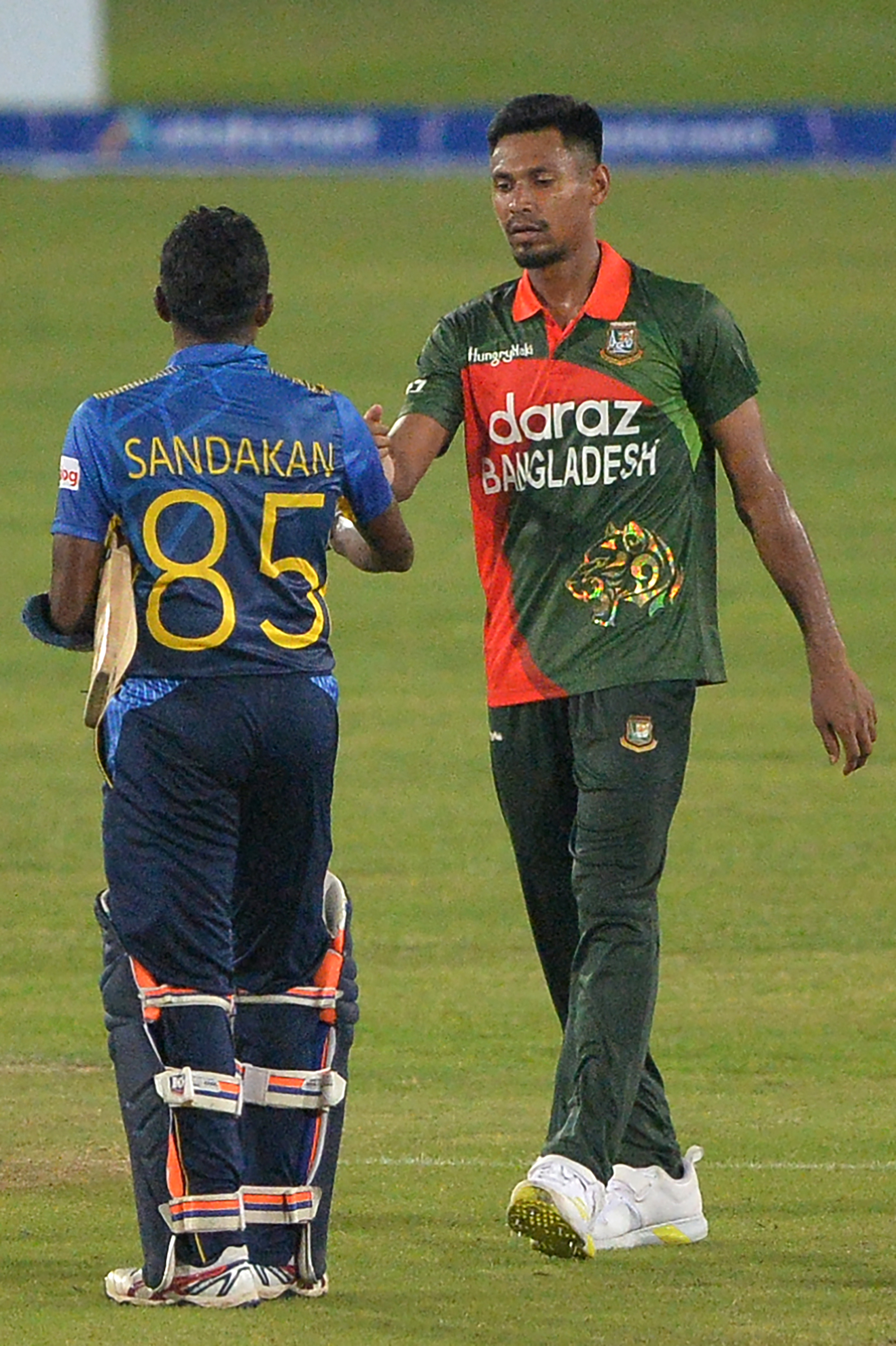 Bangladesh’s Mustafizur Rahman (R) is being congratulated by Sri Lanka’s Lakshan Sandakan after the first one-day international cricket match at the Sher-e-Bangla National Cricket Stadium in Dhaka on May 23, 2021. (Photo by MUNIR UZ ZAMAN/AFP via Getty Images)

Mehidy returned figures of 4-30 from 10 overs of his off-spin to help bowl out Sri Lanka for 224 in the tourists’ chase of 258. Number eight Hasaranga hit a valiant 74 off 60 balls.

Earlier, Mushfiqur Rahim (84) and Mahmudullah Riyad (54) put on 109 runs for the fifth wicket to guide Bangladesh to 257-6 after they opted to bat at the start of the three-match series.

In reply, Sri Lanka were in trouble at 102-6 before Hasaranga put on 47 runs with Dasun Shanaka and then 62 with Isuru Udana for the eighth wicket to revive their hopes.

Saifuddin (2-49) bowled Shanaka for 14 and then claimed the wicket of Hasaranga, who hit three fours and five sixes in his 60-ball knock. Mustafizur, who finished with figures of 3-34, sent back Udana for 21 on the very next ball.

Sri Lanka suffered a blow before the match as all-rounder Shiran Fernando was ruled out after being tested Covid-19 positive twice in two days.

The match was thrown into uncertainty as fast bowler Udana and bowling coach Chaminda Vaas also tested Covid-19 positive alongside Fernando. A second test cleared Udana and Vaas of the virus and the match began on time.

Sri Lankan players, who are also involved in a pay row with the country’s cricket authorities ahead of the series, were led by Kusal Perera.

“Losing isn’t good, but we had a lot of positives. The bowlers bowled in the right directions. Batting-wise Wanindu (Hasaranga) did a good job,” said Perera.

“It wasn’t an easy wicket to bat on, we lost a couple of early wickets but I thought Tamim batted really well. I took my time and Riyad too batted well,” said player of the match Mushfiqur.

The second match will be held on the same ground on Tuesday.