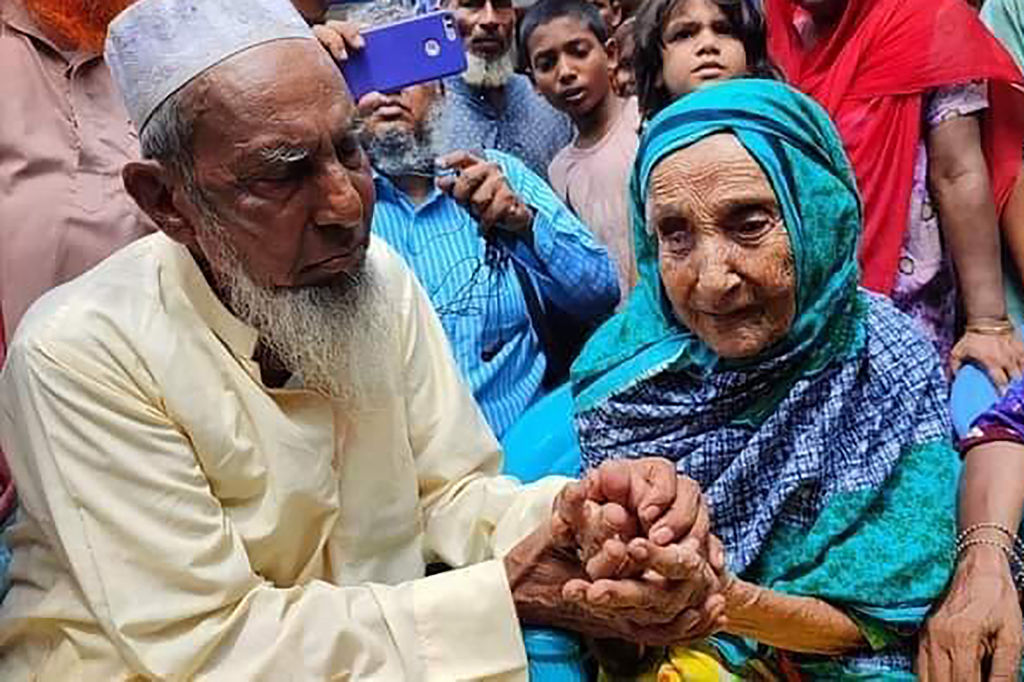 Abdul Kuddus Munsi (L) interacting with his mother Mongola Nessa (R) in Brahmanbaria, on September 25, 2021, following their reunification after 70 years through a Facebook post. (Photo by KHAN MOHAMMAD AYUB/AFP via Getty Images)

A BANGLADESHI man in his 80s has been reunited with his nearly 100-year-old mother after about 70 years, thanks to social media.

Abdul Kuddus Munsi was sent to live with his uncle when he was about 10, but lost touch with his family after running away and being adopted by two sisters.

“This is the happiest day of my life,” the 82-year-old said from Brahmanbaria, the eastern border district where he was born in 1939.

In April, a businessman posted a video of Kuddus on Facebook, appealing for help finding his parents. All Kuddus could remember about his first decade was the name of his parents and his village.

A distant relative in the village spotted the post and informed Kuddus that his mother, Mongola Nessa, thought to be in her late 90s, was still alive.

So Kuddus – himself a father to three grown-up sons and five daughters – travelled about 350 kilometres (220 miles) from the western city of Rajshahi, to end the decades of estrangement.

Over the weekend, he was finally reunited with his mother, who identified him by a tear-mark on his hand, as well as his sister.

“My mother is very old and she can’t speak properly,” he added. “She was crying after seeing me and holding my hands. I told her that your son is back and you don’t have to worry about anything from now.”

“They held each other’s hands and cried for a long time as they were reunited,” Kuddus’s nephew Shafiqul Islam said.

“Hundreds of villagers who came to see this remarkable scene also have tears in their eyes.”