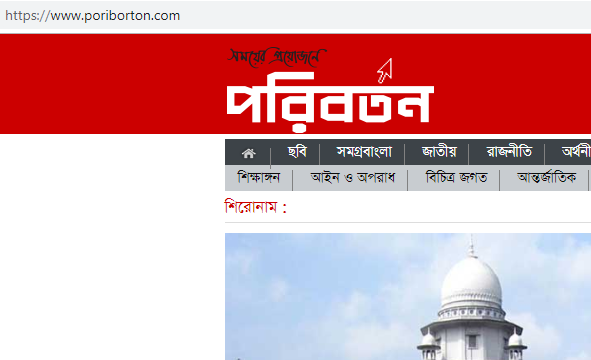 Bangladesh authorities have blocked access to a popular news portal in what critics on Tuesday condemned as the latest blow to freedom of expression in the South Asian nation.

Poriborton.com, one of the country’s top five online news outlets, was shut without notice on Sunday, managing editor Abu Sufian told AFP. He did not give a reason.

Officials for government agencies that regulate the internet industry denied any knowledge of the case or refused to comment.

But a Bangladesh media industry source said a government security agency ordered the closure after the website raised questions about the financing behind a newspaper advert against Muslim militancy.

Muslim groups had condemned the advert, saying it described some signs of the Islamic faith as marks of radicalisation.

In recent months the authorities have shut 54 news portals and websites, including that of the main opposition party, citing security reasons.

They cut access to the website of Qatar-based TV station Al Jazeera in March after it published an article alleging the involvement of a senior defence official in the disappearance of three men.

The shutdown of Poriborton came just days after three prominent activists and writers were arrested under the country’s tough internet laws.

Sawpon and Mahmood were released on bail Thursday, but Kaium remains in detention on charges of extortion and defamation under the digital security law. He risks a jail term of up to 14 years.

Prime Minister Sheikh Hasina, who took office for a third straight term in January, has been accused of increasing authoritarianism and criticised for introducing draconian internet and digital security laws that many say are being used to crack down on dissent.

Sweden-based researcher and author, Tasneem Khalil, told AFP that Poriborton.com was the “latest victim of a robust system of internet censorship in Bangladesh that has been rolled out since the beginning of this year”.

Khalil, a former journalist in Bangladesh who went into exile in 2007, said “security sources told me that access to poriborton.com was blocked because of a report it published that angered the Bangladeshi military intelligence agency.”