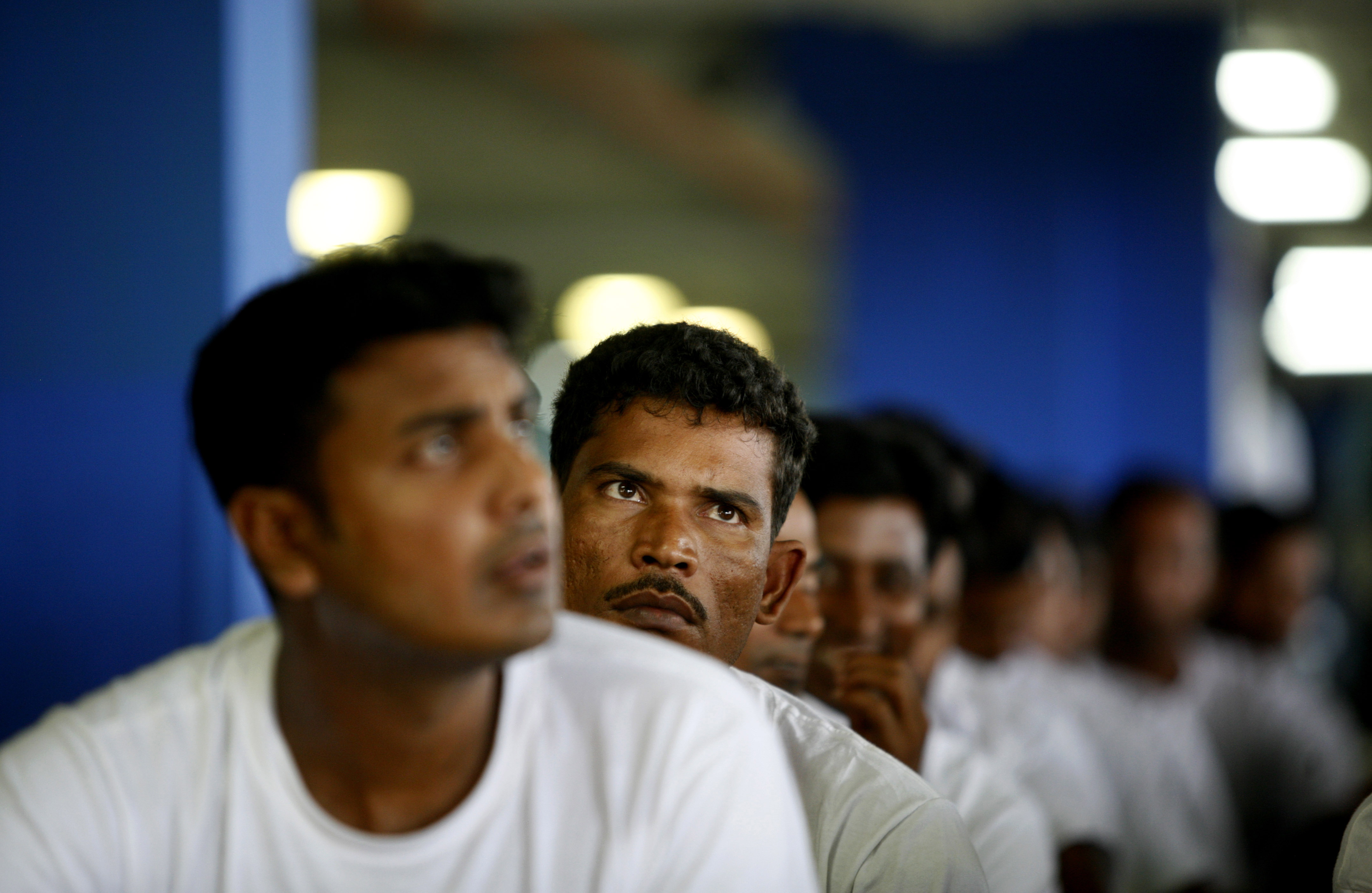 Foreign workers from Bangladesh wait at an airport carpark turned into an immigration depot in Sepang. REUTERS/Bazuki Muhammad

Cutting recruitment fees for Bangladeshi migrants who move to Malaysia for work under a new deal could curb human trafficking, according to officials, yet activists said Bangladesh‘s migration system must be revamped in order to protect workers.

Malaysia last week said it was considering a zero-cost recruitment agreement with Bangladesh – having banned its migrant workers in September 2018 over concerns that they were being charged excessive fees by labour agencies and brokers.

Bangladesh‘s current informal recruitment system involves unofficial middlemen – who despite bringing recruiters and rural workers together – often give false promises about jobs and then charge exorbitant fees that trap many workers in debt bondage.

Ahmed Munirus Saleheen, a senior official at Bangladesh‘s Ministry of Expatriates’ Welfare and Overseas Employment, said that removing or even largely reducing recruitment costs would help prevent migrant workers from being exploited in Malaysia.

“There should be no instance of trafficking under the garb of labour migration,” he told the Thomson Reuters Foundation.

“We feel that any effort to bring down the cost of migration … will contribute to the prevention of human trafficking,” he added. “Both sides should work on this.”

More than 250,000 Bangladeshi migrants moved to Malaysia for work between 2016 and 2018 under a previous migration agreement that saw workers charged an official fee of $1,900 – although middlemen were said to have widely demanded far larger sums.

It is unclear whether the new arrangement would see the cost for workers – which covers expenses from airfare and visa fees to health check-ups – removed entirely or substantially lowered. Bangladesh and Malaysia are both on a watchlist in the U.S. State Department’s Trafficking in Persons (TIP) report, that ranks nations on their anti-trafficking efforts, and are seeking to avoid a downgrade this year that could trigger sanctions.

From factories to construction sites and plantations, Malaysia is home to an estimated 4.8 million migrant workers and relies heavily on foreigners for jobs usually shunned by locals.

Malaysia struck a deal with Nepal in 2018 to ensure Nepali migrant workers would not pay any fees – after Nepal temporarily suspended sending workers due to concerns about their treatment.

Reducing or removing fees for workers will not protect them from abuse overseas, said Marina Sultana of the Refugee and Migratory Movements Research Unit – a migrants rights group.

“Migrants always pay more,” she said. “No matter what the fee, the government needs to improve its monitoring system.”

“The middlemen should be made official so that they can be made accountable for what they do. Labourers should also be made more aware and skilled so that they know about their rights.”

More than 7.5 million Bangladeshis work outside the country, which is one of the world’s most expensive for migrants with some paying up to $8,500 to go abroad, the United Nations says.

“Workers should also be able to pay money through banks and not middlemen for transparency,” he said.

Saleheen, the Bangladeshi official, said the government was seeking to improve the way it manages its migrant workers.

“Reducing the fee … won’t solve all the problems,” he said. “We need a holistic approach and we are working on that.”

Securing a job at a Malaysian plastic factory cost Mohammad Shujon $4,500 when he moved from Bangladesh‘s capital in 2016.

Yet Shujon was duped by the labour broker and ended up at a furniture company where he was not legally permitted to work.

After two years of working illegally, he was caught and jailed for two months before returning to Dhaka last year. He now works in a shop and is still trying to pay off his debts.

“The money I earn now is barely enough to feed my family,” the 33-year-old said. “I don’t know how I will clear my debts.”