Bangladesh extends shutdown till May 5 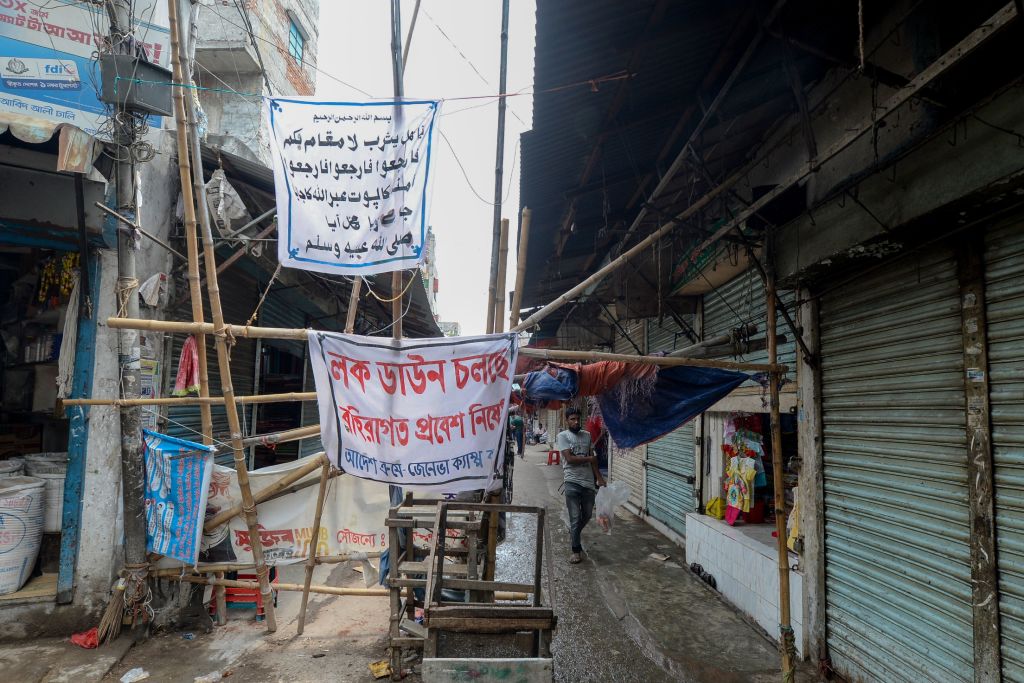 The entrance of the Geneva camp where stranded Bihari residents live is blocked during a government-imposed nationwide lockdown as a preventive measure against the COVID-19 coronavirus, in Dhaka on April 22, 2020. – Members of the Bihari community, descendants of refugees who moved to Bangladesh after the partition of India in 1947, say the pandemic has seen them made the target of more of the hostility they have suffered in recent decades. (Photo by MUNIR UZ ZAMAN / AFP) / To go with ‘BANGLADESH-PANDEMIC-MINORITIES’ (Photo by MUNIR UZ ZAMAN/AFP via Getty Images)

Bangladesh has extended the nationwide shutdown for 10 more days until May 5 to contain the spread of COVID-19 in the country.

The government initially declared a general holiday on March 26 for 10 days. Later, that was gradually extended till April 25.

The latest extension happened because of the rapid spread of the coronavirus in the country.

“The government will extend the nationwide shutdown until May 5,” an official spokesman said. The pandemic has spread to the country’s 58 of 64 administrative districts, indicating worsening situation of community level infections.

The Directorate General of Health Services (DGHS) said that the virus claimed seven more lives in a day with all the deceased from Dhaka.

“The statistics shows that over 45.51 per cent of infections occurred in Dhaka though several other hotspots were identified as well on the outskirts of the capital and elsewhere,” DGHS additional director general Nasima Sultana said.

In Bangladesh, doctors and healthcare workers appeared to be the worst victims of the disease which has so far infected 334 medics, including 186 doctors.

Policemen are the second major professional group to be infected with the virus.    Officials said until Wednesday, 217 policemen tested COVID-19 positive and 117 of them were on duty under Dhaka Metropolitan Police (DMP).

Bangladesh has limited healthcare facilities and equipment including ventilators in hospitals. If the virus spreads rapidly the whole country will be in danger, warn experts.