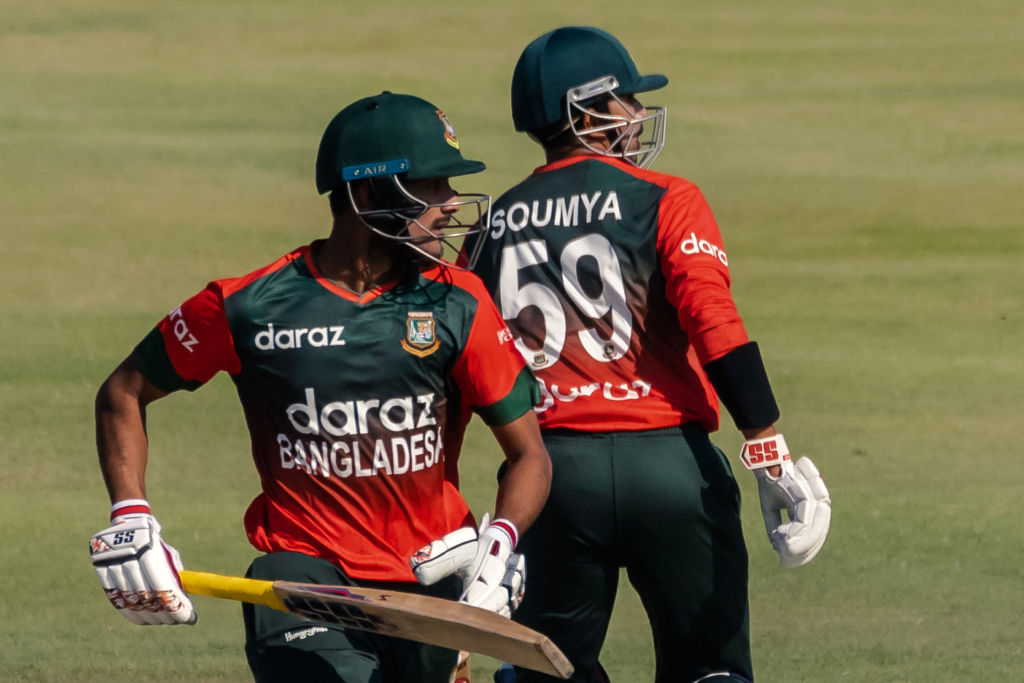 Bangladesh’s batsmen Mohammed Naim (L) and Soumya Sarkar (R) run between the wickets during the first Twenty20 international cricket match between Zimbabwe and Bangladesh at The Harare Sports Club in Harare on July 22, 2021. (Photo by JEKESAI NJIKIZANA/AFP via Getty Images)

A 102-run opening stand between Mohammad Naim and Soumya Sarkar set up Bangladesh for an eight-wicket win over Zimbabwe in the first of three Twenty20 internationals in Harare on Thursday (22).

Zimbabwe who chose to bat first were bowled out for 152 in 19 overs. Bangladesh reached the target with seven balls to spare to register their 33rd win from 100 T20 internationals.

Naim struck an unbeaten 63 from just 51 balls, with six fours, while Sarkar hit two sixes and four fours in his 45-ball 50 which was ended by a fine piece of work by wicketkeeper Regis Chakabva that brought a run-out.

Captain Mahmudullah Riyad contributed 15 before becoming another run-out victim, thanks to a superb direct throw from Blessing Muzarabani. Nurul Hasan, 16 not out, helped Naim steer Bangladesh to victory.

“We wanted to show intent, and credit goes to our top-order batters. The bowlers also came back nicely after the first 10 overs,” said Mahmudullah.

With both wickets falling to run-outs, no Zimbabwe bowler registered a wicket with captain Sikandar Raza who conceded 16 runs off two overs being the least expensive.

Chakabva top-scored in the Zimbabwe innings with 43 from 22 balls while Dion Myers (35), Wesley Madhevere (23) and Luke Jongwe (18) all made starts without being able to press on.

The only strong partnership came from Chakabva and opener Madhevere, who put on 64 for the second wicket.

Madhevere was the first to go, caught and bowled by Shakib al Hasan in the eighth over. Chakabva departed 12 balls later after being run out by Nurul Hasan.

Madhevere was considerably less brisk with his 23 runs coming from as many balls and a single six was the highlight of his stay.

“We were looking at 170-plus. I think the middle and lower middle-order did not fire. I take responsibility as well,” said Raza, who was out for a duck.

Mustafizur Rahman was the pick of the Bangladesh bowlers, taking the wickets of tail-enders Richard Ngarava and Muzarabani for a 3-31 return.