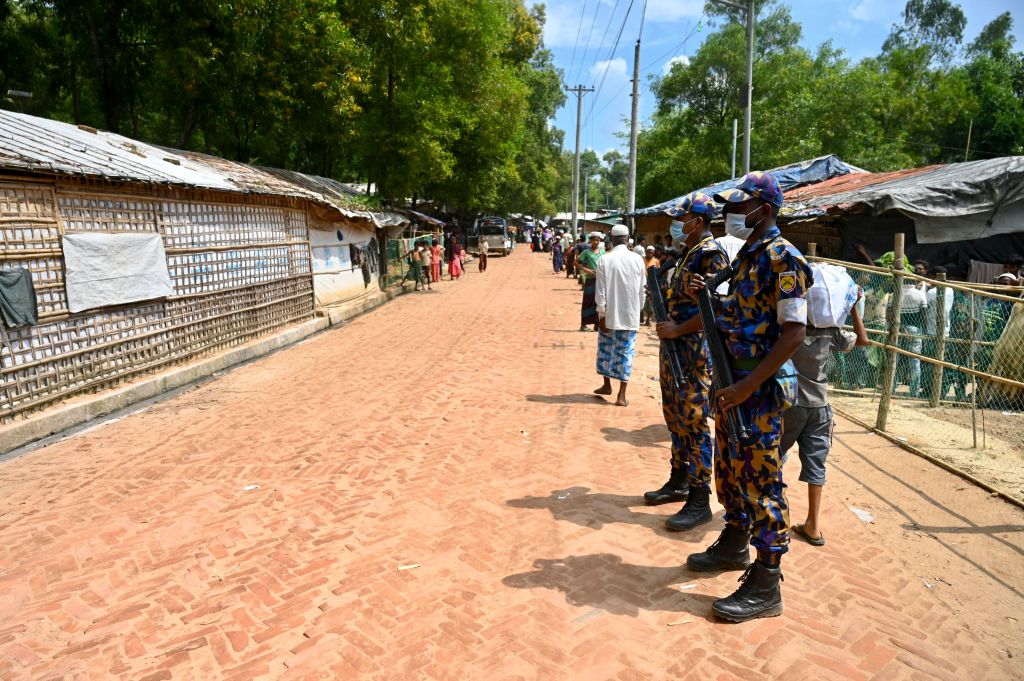 Members of the Armed Police Battalion stand guard near the office of slain Rohingya leader Mohib Ullah, who was shoot dead by gunmen last month, at Kutupalong refugee camp in Ukhia on October 6, 2021. (Photo by MUNIR UZ ZAMAN/AFP via Getty Images)

BANGLADESH police arrested at least 16 Rohingya refugees in a series of raids on camps in Dhaka after the murder of a top leader of their community last week, officials said on Sunday (10).

Rights advocate Mohib Ullah was gunned down 10 days ago by unidentified assailants outside his office at Kutupalong, the world’s largest refugee settlement in Bangladesh’s southeast.

His family and fellow community leaders have blamed the Arakan Rohingya Salvation Army (ARSA) – a militant outfit behind a series of attacks on Myanmar security posts – saying his growing popularity had enraged the group. ARSA has denied any involvement in the murder.

Mohib Ullah, 48, had become one the most respected moderate voices advocating for Rohingya refugees after nearly 800,000 people fled Myanmar for Bangladesh’s Cox’s Bazar district following military crackdowns on their villages in 2017.

“We have arrested 16 people in the past three days as part of a special drive we have launched after the murder of Mohib Ullah,” said Naimul Huq, the police official in charge of the raids.

But Huq added that those arrested were not “involved in the murder of Mohib Ullah” and ARSA does not operate in the camps.

The arrests signal a wider law enforcement crackdown on the camps, coming a week after five others were apprehended in connection with the murder.

Rohingya community leaders and rights activists have repeatedly said members of the militant outfit are active in the refugee settlement and Mohib Ullah’s family had said last week that they were afraid of leaving their homes.

“ARSA has created a reign of terror in the camps,” a senior leader of the slain leader’s rights group said, asking to remain unnamed.

“Since Mohib Ullah’s murder, I haven’t been able to go home. I’ve been hiding since the murder. ARSA members are following us and threatening us. I am helpless.”

Another community leader said: “ARSA militants tried to kidnap one of my relatives and the son of one of our members. Now we are all scared of our life. They want to kill me”.