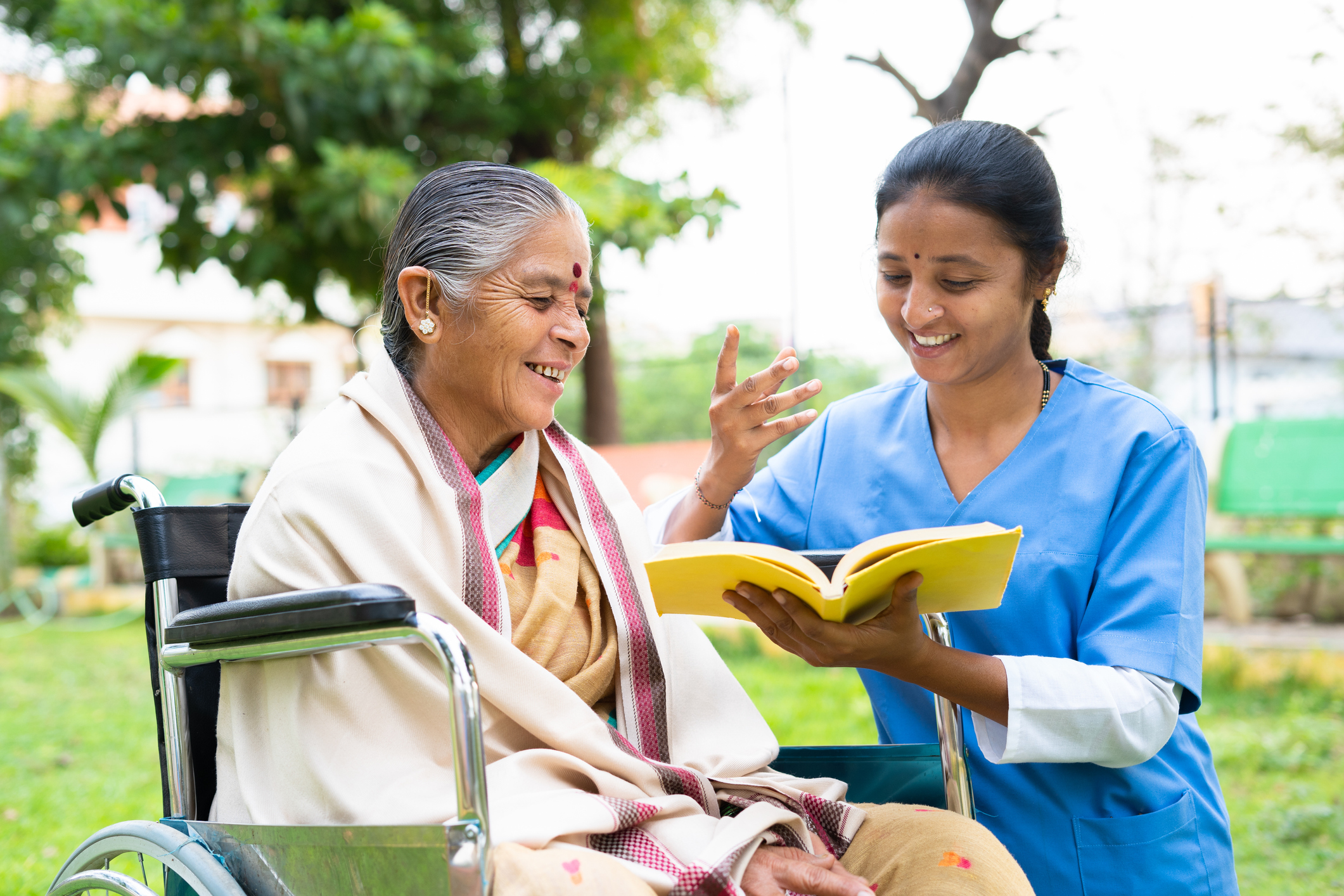 Nurse and senior woman on wheel chair laughing by reading book or novel at park – concept of relaxation, professional occupation, therapy or treatment.

HEALTH authorities need to overcome misconceptions about British Asian communities in order to change an “outdated” dementia care service, according to the researcher whose review found that the system had been “designed for white British patients”.

Dr Karan Jutlla’s research highlighted that the system was “totally inadequate” to support dementia patients from a south Asian background, who face difficulties in getting a diagnosis and are less likely to access post-diagnosis treatment and support.

“We always hear about the stigma in south Asian communities surrounding mental health and that dementia is something that’s potentially stigmatised because it’s understood as a mental- health problem,” Dr Jutlla, the dementia lead for the Institute of Health at the University of Wolverhampton, told Eastern Eye.

The 55-page report, commissioned by the Alzheimer’s Society, found that south Asian families are facing a lack of culturally inclusive care, lack of translated resources, low levels of south Asian language-speaking healthcare workers and support services that don’t understand the cultural needs of these communities.

Dr Jutlla said the materials and support “are largely provided only in English, leaving families to piecemeal translate leaflets and conversations with healthcare professionals.

“We also heard of care agencies muddling up south Asian languages and thinking they are interchangeable.”

As a result, people living with dementia in south Asian communities are facing unmet needs trying to access appropriate support after a diagnosis, with the caring responsibilities falling disproportionately on families, leaving them “isolated, lonely, anxious and depressed”.

Jas Ghag’s mother Rajinder was diagnosed with Lewy-body dementia in July 2021. The 32-year-old took three months off work to care for her mother.

Ghag said, “After mum’s diagnosis all the information we received was in English. Coming from a culture where there is no word for ‘dementia’, how was she meant to understand this? It didn’t help, it just made her more anxious.

“It feels the whole process before and after getting a diagnosis was developed for white British people and that has never been changed.

“The lack of information on services made the family feel isolated. We were chasing what we needed, but there was nothing. There needs to be someone who sits down with the person and their family and explain about the diagnosis in their first language – this would have helped us massively”.

She said: “It was exhausting, I must have contacted about 30 care agencies for mum and only one had a Punjabi speaking carer. Mum speaks English, but for her and others her age, they are going to feel more comfortable with someone who is a bit more culturally in touch and understands them in their native tongue.

“A lot of care agencies didn’t understand there’s a difference between Punjabi, Gujarati and Hindi. Previously we’ve been sent a Gujarati-speaking care worker who didn’t speak Punjabi but understood it, which the agency thought was fine – how could mum communicate effectively with her? We just continually kept hitting brick walls like this unable to find someone who can speak the language.”

Dr Jutlla, whose PhD looked at dementia care in the Sikh community in Wolverhampton, said she wasn’t surprised by what these two families had experienced.

“I work as a consultant. I support policy makers and health and social care organisations to achieve culturally inclusive dementia care. There’s always been this understanding from health and social services on misconceptions about communities that potentially look after their own, don’t want to use formal support.

“When actually there are people out there who desperately need those services. But what you have to do with those communities is actually going that one step further to support them because they potentially have some additional barriers that they’re dealing with.

There are currently around 900,000 people with dementia in the UK, according to the Alzheimer’s Society.

This is projected to rise to 1.6 million by 2040. An estimated 209,600 will develop dementia this year, that’s one every three minutes.

People from south Asian heritage in the UK are more likely to develop the disease than the general population due to their higher risk of other illnesses, such as heart disease, stroke and diabetes, that increase the risk of dementia.

The number of British Asians living with dementia is set to increase by 600 per cent within the next three decades.

In May, health secretary Sajid Javid announced a 10-year plan to boost research into neurodegenerative diseases, which includes £375 million committed to research on how new medicines and emerging science and technology can be harnessed to improve outcomes for dementia patients across the country.

Dr Jutlla welcomed the government’s support for dementia research, but insisted there needs to be specific support focused at the south Asian communities.

“Changes must be made to help people with dementia and their families in south Asian communities so they feel heard and supported – culturally-aware services suited for different languages must be there to help people, not compound their well-being further.

“We need more healthcare professionals from South Asian communities and more community link workers, who are from the community themselves and are able to act as a link worker between the community and services. Help them navigate their way through the pathway, so that they can understand their diagnosis and treatment options.

“We also need healthcare organisations to be strong on equality and diversity. This needs to go beyond a tick-box exercise of just saying ‘look, we’ve got a diverse workforce now’. We need people to be trained and skilled on how to work effectively in cross-cultural situations.”

Kate Lee, Alzheimer’s Society CEO, said: “No one should feel excluded from dementia care. Personalised care is crucial to supporting people to live fulfilled lives for longer and that means providing culturally inclusive services. This outdated system is leaving South Asian families feeling adrift, helpless and anxious – at a time when they need help the most.

“Alzheimer’s Society has developed materials in Punjabi to support those in the community and make sure no one is facing dementia alone. Visit alzheimers. org.uk/punjabi or call 0333 150 3456 for more information, with Punjabi translation services available.”