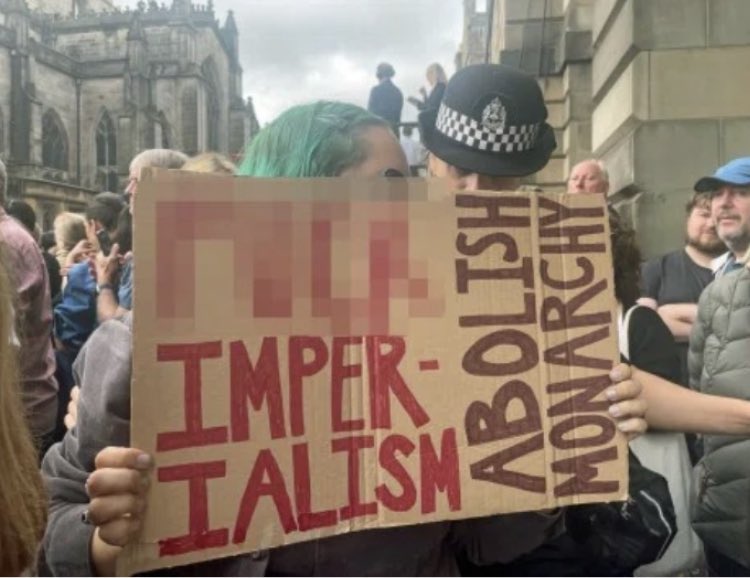 A Mexican student arrested in Edinburgh over the weekend after an anti-monarchy demonstration claimed the “wrongful” police action against her was “a violation of freedom of speech.”

Mariángela, who did not wish to reveal her last name, was holding a sign reading “f*** imperialism, abolish monarchy” during a ceremony for King Charles III at St Giles’ Cathedral in the Scottish capital on Sunday. This prompted the police to intervene and she has been charged with “breach of the peace”.

“I was wrongfully arrested while exercising my right to protest,” she is quoted as saying.

“Holding a sign, I condemned the centuries of colonial injustice, genocide, and unlawful extraction… carried out in the name of the British Crown,” the 22-year-old student living in Scotland said.

Police officers had been ordered by a superior to arrest her although initially it was suggested that she would be released, Mariángela told openDemocracy.

However, a spokesperson for Police Scotland attributed her arrest to her “behaviour likely to cause a reasonable person to suffer fear or alarm” and denied her sign was the reason for it.

The woman, due to appear at Edinburgh Sheriff Court on September 30, is part of the left-wing campaign group Global Majority Vs.

Its members said Mariángela’s arrest was a “symptom of the ongoing movement to criminalise true freedom of speech”.

“There is an active effort to repress and isolate our condemnation of a ruling class,” they said in a statement reported by the Independent.

“The violence of Empire is not historic but present and is still sustained by the Crown and the establishment,” the group’s members said.

The police in Scotland also have arrested three men since Sunday for “breaches of the peace” during the Queen’s procession.

While a man was arrested and de-arrested in Oxford, a woman holding a sign at Parliament in London was led away.

The police actions triggered condemnations from rights groups who said the arrests were worrying”.