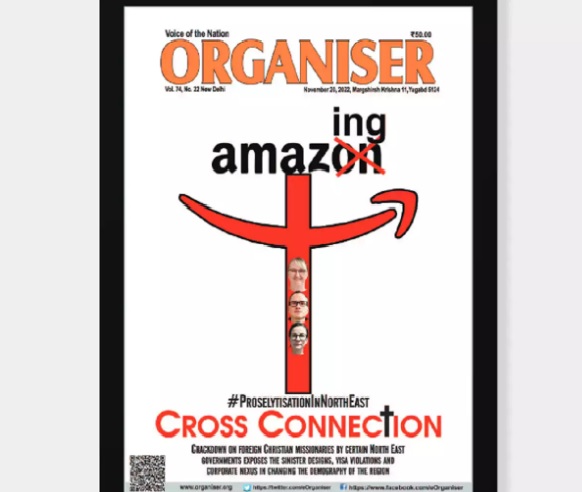 In a cover story on its latest edition, the magazine said, “E-commerce giant Amazon is financing the Christian conversion module run by American Baptist Church (ABM). There is a possibility of a money laundering ring run by multinational companies and ABM to fund India’s huge missionary conversion mission.”

In the cover story titled Amazing Cross Connection, the RSS-affiliated magazine said the Social Justice Forum of Arunachal Pradesh had alleged that Amazon was “continuously funding the All India Mission (AIM), the frontal organisation of ABM, through its foundation Amazon Smile”.

“Amazon is sponsoring the conversion module of All India Mission by donating money against every purchase by an Indian,” the magazine alleged, adding that AIM had openly claimed on its website that it had converted 25,000 people to Christianity in northeast India.

RSS-linked magazines have been critical of Amazon and termed it as “East India Company 2.0”.

RSS-linked Hindi weekly ‘Panchjanya’ in October last year had alleged that the company had paid crores of rupees in bribes for favourable government policies.

Amazon wants to establish its monopoly in the Indian market, ‘Panchjanya’ claimed, and said, “For doing so, it has started taking initiatives for seizing the economic, political and personal freedom of the Indian citizens.”

Nobody should go through what I have gone through: Mumbai terror attack survivor…

Qatar has conveyed no invitation extended to Zakir Naik for FIFA World Cup:…