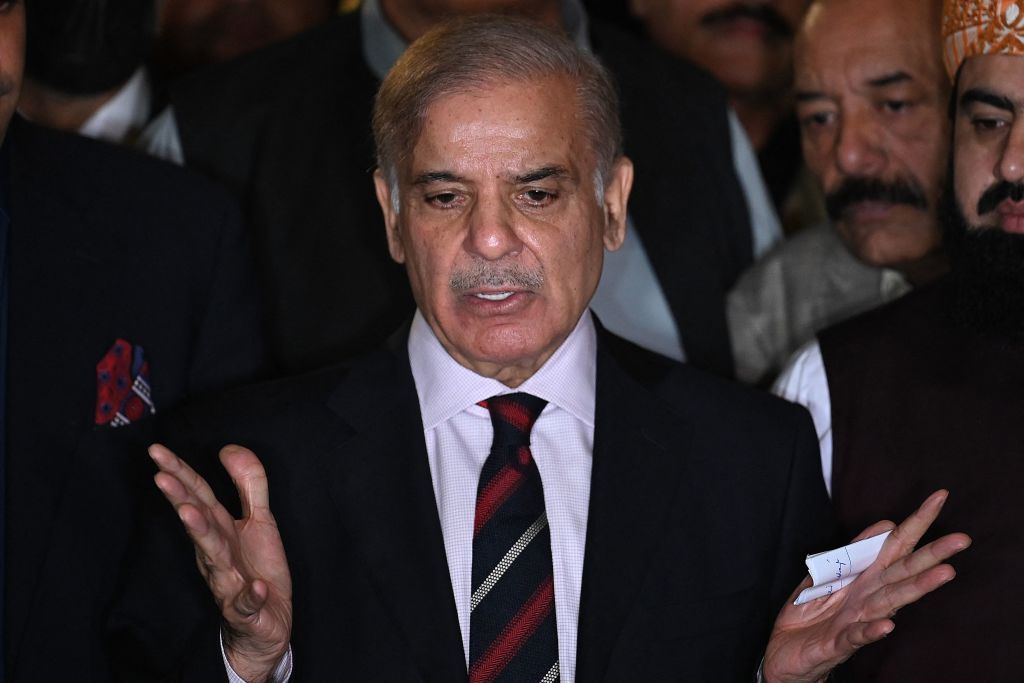 Pakistan’s opposition leader Shahbaz Sharif (C) speaks during a press conference with other parties leaders in Islamabad on April 7, 2022 after a Supreme Court verdict. – Pakistan Prime Minister Imran Khan faces being booted from office at the weekend after the Supreme Court ruled on April 7 that parliament had been illegally dissolved and a no-confidence vote on his government must go ahead. (Photo by Aamir QURESHI / AFP) (Photo by AAMIR QURESHI/AFP via Getty Images)

In response to cash-strapped Pakistan’s request for fresh loans, the UAE has offered to buy minority shares in publicly-listed government-owned companies at a negotiated price and a seat on each of the firm’s boards, according to a media report on Tuesday.

The development comes amid China’s decision to roll over another USD 2 billion Pakistani debt that matures from June 27 to July 23, providing a sigh of relief to Islamabad after transferring USD 2.3 billion last week.

The offer, if accepted, could give a big boost to the cash-starved government and will mark a departure from the traditional lender-borrower relationship between Islamabad and Abu Dhabi, The Express Tribune newspaper reported.

The Express Tribune quoting sources said that the UAE government has offered to acquire 10-12 per cent shares in government-owned companies that are listed on the stock market through its sovereign wealth funds.

There is a proposal from a friendly country to purchase Pakistani companies’ stocks on a buy-back basis, which means buying secured-loan-based securities, Finance Minister Miftah Ismail was quoted as saying in the report.

The sources said that the UAE had made a clean offer for the acquisition of stakes in the firms. But the government wanted to add a provision in any such contract where it will have a right to buy back these stakes after a certain period, they added.

The UAE has made the offer on the lines it invested USD 2 billion in Egypt through the purchase of stakes in a number of state-owned companies in April this year aimed at bailing out the Egyptian government.

The offer came in response to Prime Minister Shehbaz Sharif’s request for a multibillion-dollar bailout package during his visit to the UAE in April. The sources said that in response to the prime minister’s request, the UAE had sent a delegation to Pakistan that met with Sharif in the first week of May in Lahore.

Pakistan is also trying to revive the IMF programme and waiting for the draft Memorandum for Economic and Financial Policies (MEFP) document before reaching a staff-level deal with the fund.

The sources said that this time the UAE was not inclined to hand over another cheque of USD 2 billion to Islamabad, after Pakistan failed to pay back the USD 2 billion loan received in February 2019. In March this year, the UAE rolled over USD 2 billion in debt for one more year.

Their interest in Pakistan could give a big boost to the share price of about 20 listed public sector companies, including companies controlled by the military’s commercial arms. The sources said that Fauji Foundation companies were also on the plate and the foundation’s managing director recently participated in the meetings.

There are around one-and-a-half dozen government companies that are listed on the stock exchange and open for grabs.

The sources said that Pakistan can immediately get an investment of USD 1 billion to USD 1.3 billion by selling 10 per cent stakes in the blue-chip companies. But the bureaucracy was reluctant to go ahead with the transaction, delaying the whole process and irritating the UAE government, the report said.