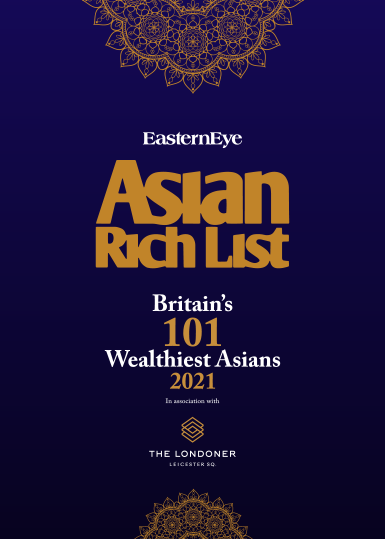 BRITISH ASIAN businesses increased their wealth and rose to unprecedented challenges during the pandemic – as the latest Asian Rich List exclusively reveals.

The annual, glossy publication shows the total estimated wealth of the 101 profiled in this year’s list – the first since the global pandemic took hold in March 2020 – has gone up by 21 per cent to £99.5 billion.

Topping the list is the Hinduja family. They have seen their wealth increase by £2.5bn, over the year, from £25bn.

The Asian Rich List, which will be released on Friday (19) at the Asian Business Awards in London, uncovers exemplary tales of success – but also shows a re-setting and a renewed commitment to compassionate values at a time of huge loss and suffering during the global pandemic.

There are 15 billionaires on the list – two up on the previous list in 2019. Among those joining the exclusive club of billionaires are brothers Vijay Patel and his brother Bhikhu Patel of Waymade plc. One a pharmacist and the other an architect, respectively, they joined forces and are serial entrepreneurs.

The Patels started with a single pharmacy and continued to move up the chain into manufacturing and distribution. They are refugees from Kenya and came with their single mother to the UK. Vijay still remembers working in a Wembley chip shop to fund his studies.

Hotelier Jasminder Singh is another billionaire who started out in relatively humble circumstances with just a single hotel and an accountancy qualification. Despite his Edwardian Group taking a major hit as a prominent London luxury hotelier, he defiantly continued to build the £500 million luxury hotel, The Londoner, in Leicester Square.

It is a statement hotel in many ways and perhaps most singularly represents a rejuvenation and reopening for the capital itself.

The Londoner received rave reviews when it opened its door to the public this autumn and has continued to attract plaudits everywhere.

Elsewhere, the Asian Rich List shows that while businesses in food, drink, pharmacy and property didn’t suffer losses – those in hospitality, leisure and care bore the brunt of difficulties and continue to face acute staffing issues.

Friday’s glittering Asian Business Awards – a unique gathering of some of the community’s most successful business owners, takes place in the grand ball room of The Londoner.

There are six new entries as the Asian Rich List uncovers those who tend to have a low personal (media) profile, but who have a myriad of business interests and have created thousands of jobs cumulatively.

The highest among these is Sandy Chadha (40=) of AIM listed Supreme Limited, a Manchester-based wholesaler of batteries, vitamins and vape products.

He is estimated to be worth £350m. He got a hand in business through his father who drove a mobile retail van around seaside resorts, selling watches and the like to tourists.

Pharmacist brothers Danesh and Sanjay Gadhia (67) have built a powerhouse Leicester-based pharma business, Morningside, and are estimated to have a fortune of £190m. Aly Janmohamed (81) runs many high street food brand outlets – from KFC to Starbucks – and is worth £130m.

Property, leisure and care homes magnate Meenu Malohtra (85) is a man who started with very little, but has a knack of building businesses from the very bottom-up. His Malhotra Group plc is based in Newcastle and his wealth is estimated to be £125m.

The Hinduja family, who run a conglomerate of international concerns, remain Britain’s wealthiest Asians. Perhaps unsurprisingly, and with more of an eye on the post-pandemic situation, the conglomerate actually took on people during the crisis.

Gopichand Hinduja, one of the three brothers behind the group, told the Asian Rich List they bucked the global trend and didn’t take people off the payroll.

“On the contrary, we have added to the staff. We haven’t cut any. Covid has been very, very difficult for many families, who have lost near and dear ones,” he said.

“We also lost many of our executives. But we find our employees, who number 170,000 globally, are loyal. They are committed and have a passion to grow. They are the real pillars of our group.”

The group is focusing on building a new generation of electric buses and also have assets in banking, lubricants, real estate, energy and cyber security.

Their newest jewel in the crown is one of the most exclusive properties in London – the Old War Office (OWO). It will open as a Raffles Hotel (the brand’s first in the UK) next year and is now also marketing 85 private apartments which have already gone on sale, as OWO Residences, and are the first of the brand’s type in Europe.

The apartments will have the same access to the hotel’s extensive amenities. The OWO Raffles Hotel will house nine restaurants and bars, a spa with 20m pool and another grand ballroom.

Hotelier Surinder Arora (ranked 16th) shed about 500 staff during the pandemic and his estimated wealth is at £950m. Yet he was philosophical about the pandemic and what it had done to his business, personally.

He commandeered his O2 Intercontinental Hotel in Greenwich for use by NHS staff free of charge as the Excel Centre was converted into a Nightingale Hospital at the height of the covid crisis in the UK last year.

“It’s our way of saying ‘thank you’ to these courageous, selfless men and women,” he told the Asian Rich List.

Lord Zameer Choudrey (15), CEO of Bestway, a conglomerate with interests in banking, cement, pharmacy and wholesaling and a billionaire in his own right, was even more stark in his assessment of what it meant to have a fortune like his.

“I would say we’re lucky to be alive – and lucky to be here. That’s all I would say. We are very fortunate that our businesses survived, and we have also been able to retain the businesses and are in good health. We are in the food business, which has held up. The pharmacy business is just holding up. The property business – that’s also not too bad,” he told the Asian Rich List.

Kalpesh Solanki and Shailesh Solanki, group managing editor and executive editor of Asian Media Group, respectively, which published the Asian Rich List and Eastern Eye, said: “The Asian Rich List is the barometer of Asian wealth in Britain and our analysis shows the true resilience of these businesses despite the enormous pressures caused by the pandemic and Brexit. Asian entrepreneurs have enriched Britain in all aspects of the nation’s life. They have helped create an enterprise Britain and the Asian Rich List is a testament to that achievement and we salute the drive, passion and energy of these entrepreneurs.”

It should be noted that the period of analysis does not cover the whole of the pandemic as most company results were lodged in December 2020 – some were only available to the period of March 2020. The Asian Rich List is now in its 11th edition and charts the rise over the Asian business community over many years – when the Asian Media Group first started publishing the Asian Rich List in 2009, the figure required to get onto to 101 richest Asians was £25m.

The Asian Rich List will be launched at the Asian Business Awards on Friday.

To purchase a copy, see www.easterneye.biz/ARL/subscribe/ or via email
Saurin Shah [email protected] or by calling 0207 654 7737.