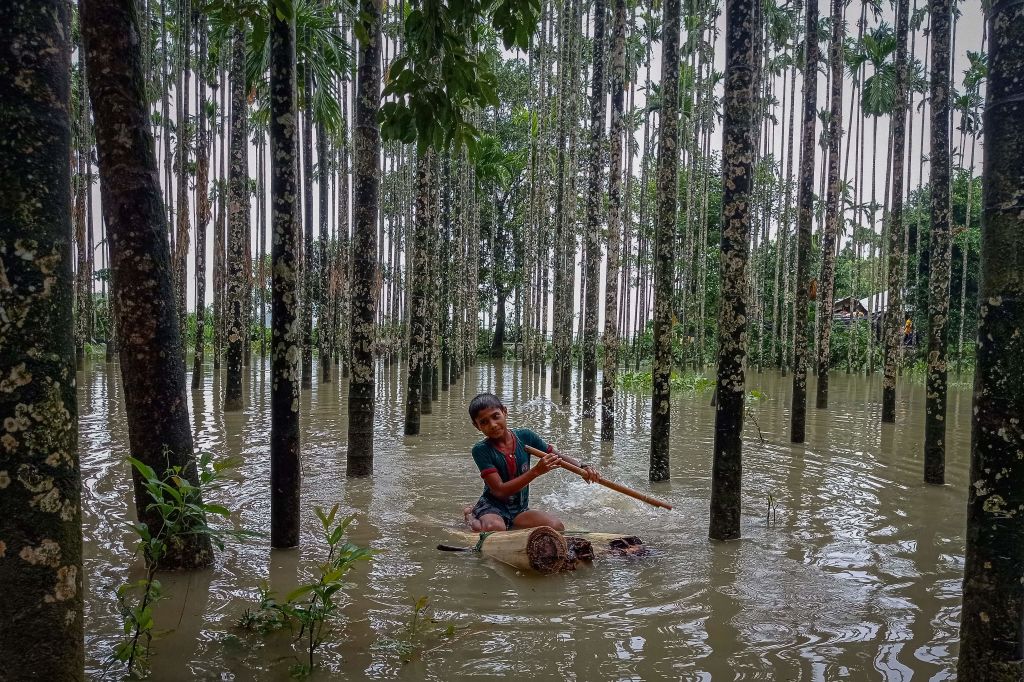 A child moves through a flooded area using a makeshift raft at Maulovir Para, Cox’s Bazar on July 30, 2021 after monsoon floods and landslides cut off villages across southeast Bangladesh (Photo by TANBIR MIRAJ/AFP via Getty Images)

MONSOON floods and landslides have cut off more than 300,000 people in villages across southeast Bangladesh and killed at least 20 people including six Rohingya refugees, officials said Friday (30).

The region along the Bangladesh-Myanmar border where nearly one million Rohingya refugees from Myanmar are in camps has been battered by torrential rain since Monday (26).

“The floods have stranded some 306,000 people in Cox’s Bazar district. At least 70 villages have been submerged by floods,” Mamunur Rashid, the district administrator, said.

“At least 20 people have died in floods and landslides including six Rohingya refugees,” he added.

About 36,000 people have been moved into schools and cyclone shelters, officials said.

“Many homes are waterlogged. Thousands of people have not been able to get out for the last three days. The roads are all blocked,” Tipu Sultan, a councillor in remote Jhilwanja Union, said.

Earlier this week Bangladesh evacuated 10,000 Rohingyas from refugee camps in Cox’s Bazar because of the storms.

Aid workers said a coronavirus lockdown in the camps, following a major spike in cases, has affected rescue work as access is restricted.

About 740,000 Rohingyas fled Myanmar’s Rakhine state in 2017 after security forces launched a clampdown that the UN has said may amount to genocide.